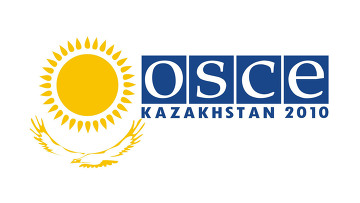 One of the most significant milestones in the history of modern Kazakhstan was the country’s 2010 chairmanship of the Organization for Security and Co-operation in Europe (OSCE), the largest regional structure embracing 56 countries of Europe, Central Asia and North America.

Kazakhstan was the first post-Soviet country to chair the Organization. This historic decision, which demonstrated the OSCE commitment to its principle of equality of member states and the doctrine of “common security zone from Vancouver to Vladivostok,” was the recognition of the increasing role of Kazakhstan in the international arena.

The motto of Kazakhstan’s chairmanship of the OSCE was based on the four “T” principle, standing for Trust, Traditions, Transparency and Tolerance. Trust - is the key resource of international relations. The trustful relationships between the countries and a permanent dialogue shape the framework architecture of a modern system of collective security. Tradition underlines Kazakhstan’s commitment to the fundamental principles and values ​​of the OSCE. Transparency means the ultimate openness, the absence of “double standards” and “dividing lines”. Tolerance stands for the awareness of the increasing importance of intercultural and inter-civilizational dialogue.

The final forum of Kazakhstan’s OSCE chairmanship was the Astana OSCE summit, held on December 1-2, 2010, after more than ten years of break since the previous Summit held in Istanbul in 1999.

The Astana Summit demonstrated the political will of the heads of OSCE member states to overcome the growing polarization in the international politics and mutual estrangement between the member countries of the Organisation.

The summit addressed the issues of sustainable security in the Euro-Atlantic zone and Eurasia, as well as the problem of Afghanistan and resolution of protracted conflicts.

Addressing the summit participants, President Nursultan Nazarbayev mentioned the need to move to a new paradigm of security implying the formation of a common space of cooperation from the Atlantic Ocean to the Pacific Ocean and from the Arctic Ocean to the Indian Ocean.

Following the results of the summit, the Astana Declaration was adopted. In it, the Summit participants reaffirmed their commitment to the OSCE principles and values enshrined in the Helsinki Final Act and the Charter of Paris for a New Europe and other documents of the Organisation. In addition, representatives of the OSCE member states committed themselves to continue working in all three dimensions, to increase efforts to resolve conflicts and hotbeds of instability, promote human rights, and breathe new life into the Organisation in response to the new security challenges.

The summit in Astana was praised by the heads of delegation. Thus, the Secretary General of the Organization Marc Perrin de Brichambaut noted that the decisions taken in the Kazakh capital, will promote the development of a single strategy to withstand common challenges and threats. UN Secretary-General Ban Ki-moon said Kazakhstan’s chairmanship of the OSCE was truly successful. The US Secretary of State Hillary Clinton emphasized that the OSCE summit demonstrated the significant role of Kazakhstan in the international arena.

President Nursultan Nazarbayev called the two-day summit a “historic event for the entire OSCE community” that became the symbol of a “spirit of Astana.”