Congress of Leaders of World and Traditional Religions 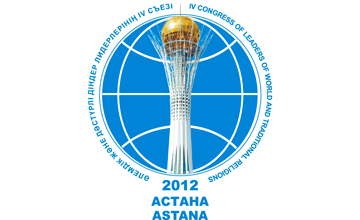 Today representatives of more than 100 ethnic groups and 18 confessions live in peace and harmony in Kazakhstan.

Being aware of the increased role of religion in society, President Nursultan Nazarbayev put forward an initiative to convene the Congress of Leaders of World and Traditional Religions in the capital city of Kazakhstan - Astana.

As conceived by the Head of State, the dialogue between the leaders of world and traditional religions, built on trust and mutual understanding, will open up broad prospects for international cooperation in the appropriate area, helping to overcome violence, religious extremism and terrorism

The 1st Congress was held on September 23-24, 2003 in Astana. It was attended by the authoritative representatives of Islam, Christianity, Judaism, Shintoism, Hinduism and Buddhism.

The unprecedented success of Kazakhstan’s initiative to conduct interfaith dialogue platform was proved by the representative guests and high-ranking participants of the Congress.

The Congress demonstrated the topicality and necessity to implement the idea of cooperation and unity of different religions in the name of a worthy life of people across the world. In addition, it was supported by such influential politicians as Kofi Annan, George Bush, Margaret Thatcher, Jiang Zemin, Nelson Mandela, Valéry Giscard d’Estaing and others.

The forum adopted a declaration in which spiritual leaders reaffirmed their commitment to promote peace and progress for humanity and preserve social stability as the basis of the harmonious world in the future. Finally, the 1st Congress made a decision to hold the interreligious Congress at least once every three years.

The 2nd Congress of Leaders of World and Traditional Religions was held on September 12-13, 2006 in the newly-built Palace of Peace and Accord in Astana.

Following the results of the Congress, the principles of interreligious dialogue were adopted, which reflected the basic principles that guided the participants. At the end of the 2nd Congress, the participants also adopted a joint declaration calling on representatives of all religions and ethnic groups to prevent conflicts stemming from the cultural and religious differences. The document also reflected the global need to replace the “ideology of confrontation” by the “culture of peace.”

The 3rd Congress of Leaders of World and Traditional Religions was held on July 1-2, 2009 in Astana and was attended by 77 delegations from 35 countries of Europe, Asia, the Middle East and the USA. The Congress was dedicated to the increasing role of religious leaders in solving the emerging problems in terms of their contribution to the maintenance of a tolerant world based on mutual respect and cooperation. Among the novelties of the Congress is the creation of section sessions to discuss the most pressing issues related to peace, reconciliation and dialogue in the modern world.

As a result of the 3rd Congress, the participants adopted a joint declaration urging the international community to help religious leaders and organisations to establish interreligious dialogue in order to improve mutual understanding and respect.

The 4th Congress of Leaders of World and Traditional Religions was held on May 30-31, 2012 in Astana. The forum with the theme “Peace and harmony as the choice of mankind” was attended by 85 delegations from 40 countries.

The first meeting of the Council of religious leaders was held within the framework of the Congress. It was aimed at identifying major priorities and mechanisms of dialogue and cooperation with other forums and international organisations that focus on cultural and economic cooperation.

At the end, the Congress adopted a joint statement of it participants. The document had a deep spiritual meaning. The religious leaders called on the mankind to seek interaction, harmony and peace, justice and creativity for the future of the Earth.

The 5th Congress of Leaders of World and Traditional Religions was held on June 10-11, 2015 in Astana. There were more than 80 delegations from 42 countries of the world, among whom the UN Secretary General Ban Ki-moon, King Abdullah II of Jordan, and the Head of the Finnish Republic Sauli Niinistö.

The anniversary 5th Congress was of particular importance because of the increasing global geopolitical tensions, as well as ethnic and religious conflicts in different parts of the world.

That is why the central theme of the event was “Dialogue for Peace and Development,” as it is the willingness to compromise which serves as the starting point in strengthening stability and harmony on the planet.

At the end of the Congress, the participants adopted a joint declaration calling to unite the efforts of all religious and political figures from different countries of the world to overcome the threats and challenges of the 21st century.

While addressing the participants during the closing ceremony, Nursultan Nazarbayev said: “The Congress of Leaders of World and Traditional Religions held in a form of the dialogue between clerics and politicians. Thus, we are willing to ensure that the force of morality and spirituality would strengthen the righteous actions in the areas of peace and harmony between people. I urge all members of the Congress to bring its peaceful atmosphere in the congregation of their followers and associates.”

Hosting the Congress of Leaders of World and Traditional Religions, Kazakhstan demonstrates to the world community an example of national consensus and the consolidation of its society. Our country has rich experience in the maintenance of interethnic and interreligious dialogue and is ready for broad and efficient cooperation in this field.

The initiative of President Nursultan Nazarbayev to convene the Congress in Astana has a special significance in the development of the global dialogue among cultures and civilizations.