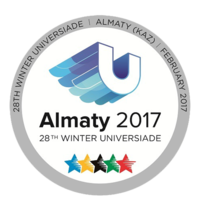 The university sports first originated in 1905 after the United States hosted the first international competition of young students. The First World Student Games were held in Paris in 1923. However, the first sports competition, known as the Universiade, was held in 1959 in Turin, Italy.

Over the past years, the Universiade has become one of the most important international mass-sport and cultural events in the world. One of its main purposes is to promote sports as part of the social education.

An official decision to hold the Universiade in Almaty was adopted after a vote in the International University Sports Federation (FISU) on November 29, 2011, in Brussels. Thus, Almaty became the capital of the 28th Winter Universiade of 201, being the first post-Soviet country to win the right to host the competitions. Prior to that, summer youth sports games took place in Moscow in 1973 and Kazan in 2013. On February 15, 2015 in the Spanish city of Granada the solemn ceremony of handing over the flag of Universiade to Almaty took place.

The falcon Sunkar was chosen as the mascot of the World Universiade 2017 in Almaty, which, according to the authors, embodies the speed, ease, energy and thirst for victory. The logo is made in the form of stylized wings that have a dynamic shape. The slogan of the Universiade is “Spread your wings!”.

The 28th World Winter Universiade will be held from January 28 to February 8, 2017. According to preliminary data, it will be attended by over five thousand students from 50 countries of the FISU alliance. It is expected thatnearly three thousand volunteers will be involved in the event.

The facilities constructed for the 2011 7th Winter Asian Games served as the infrastructural basis for the preparation of the city to the major sporting event. Among them, the International Ski Jumping Centre “Sunkar”, Baluan Sholak Sports Palace and ski biathlon stadium in Almaty region. The sporting events will also be held on a high-mountain skating rink “Medeu” and the “Shymbulak” ski resort. An Ice Palace, Ice Arena and Athletic Village will be built for the Universiade.