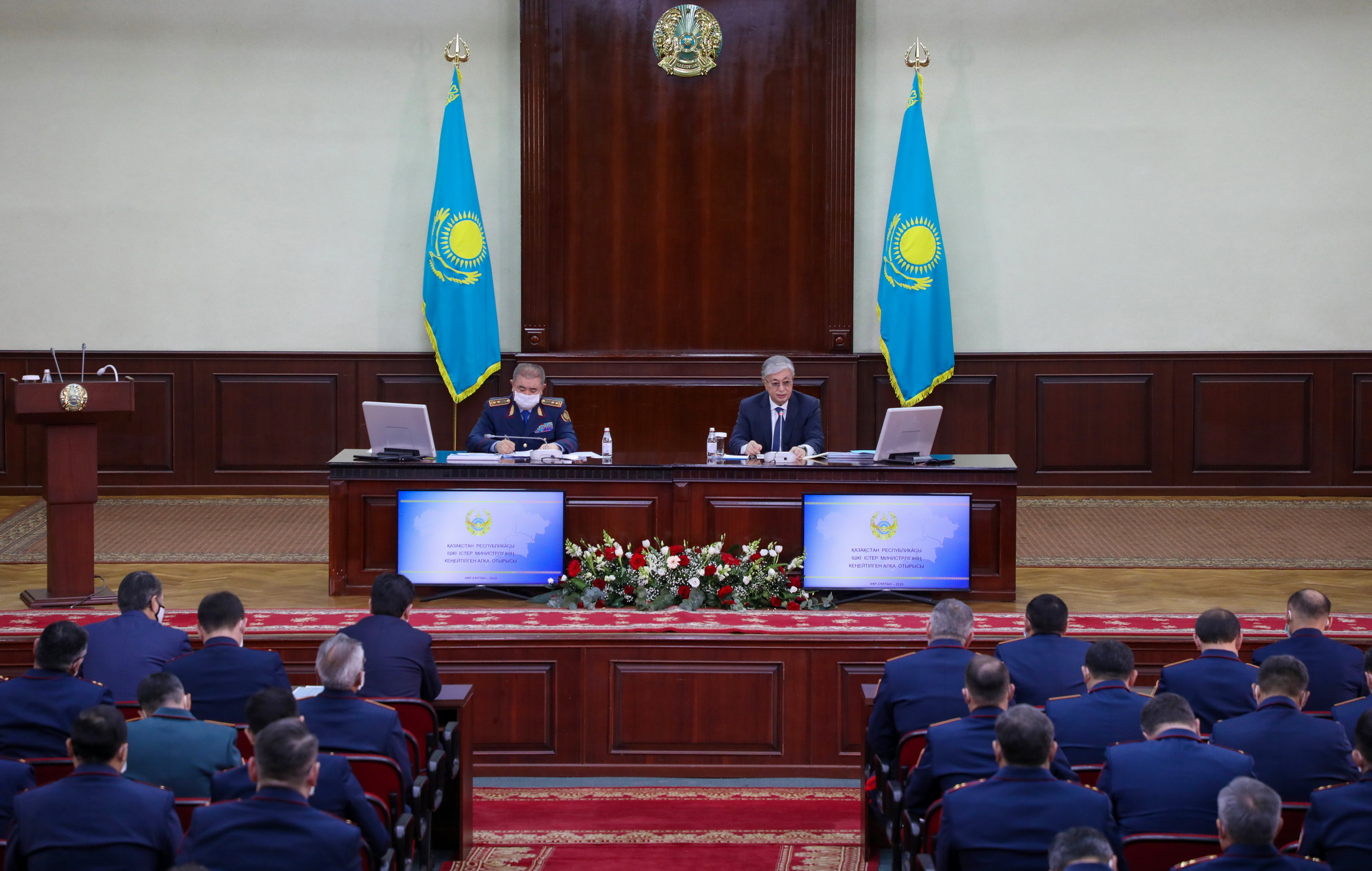 The Enlarged Meeting of the Board of the Ministry of Internal Affairs chaired by Head of State Kassym-Jomart Tokayev held today, during which the activities of Internal Affairs bodies for 9 months of 2020 and execution of President’s orders were reviewed.

The event was attended by heads of the Internal Affairs Ministry, territorial police departments and district inspectors from all regions of the country.

Prior the meeting, the President inspected the special equipment used by the Internal Affairs bodies, as well as got acquainted with the work of the Operational Management Centre of the Nur-Sultan police Department.

Addressing the police, the Head of State expressed gratitude to all employees of the Internal Affairs bodies who faithfully perform their duties amid the coronavirus pandemic.

Kassym-Jomart Tokayev recalled the dangers and risks of daily work in the Ministry of Internal Affairs. As it was noted in his speech, during the years of Independence, 797 police officers were killed in the line of duty, 2604 employees were seriously injured.

“Preserving the stability of the state and the unity of society is the main task. At such moments, much depends on the professional level of police officers, the spirit of patriotism and dedication. I believe that all employees of the Internal Affairs bodies understand this,” the President said.

The Head of State called for lessons to be learned from the tragic events that took place early year in the Kordai district and the city of Satpayev.

“If we cannot preserve the well-being and unity of our people during peaceful days, then it is a challenge to our state. Interethnic harmony and stability in society are our main values. People should be calm about their safety. The police must prove that they protect law and order not in words, but in deeds,” President Tokayev is convinced.

The President stressed the importance of introducing a service model of relations between Internal Affairs agencies and citizens, in which the key element should be the “community-based police”.

“The community police officer is a key figure in crime prevention in a specific territory, designed to solve the problems of the local population, directly or indirectly stop crime, and improve the quality of life of our citizens. You need to have an open dialogue with people, have to know what they expect from the local police, and always be there when you need help. We will not be able to achieve the trust of Kazakhstan people in any other way,” the Head of State stressed.

President Tokayev raised the issue of continuing structural reforms, without which the success in implementing reforms is impossible. In his opinion, the police without any regret should part with non-core functions.

“It is not the time when the police can be distracted from their immediate duties. The first step has already been taken. The Ministry of Emergency Situations has been withdrawn from the Ministry of Internal Affairs. Further optimization of the Internal Affairs bodies’ structure will be carried out within the Commission on Reform of the Law Enforcement and Judicial Systems. But this does not mean weakening the functionality of the police. The Interior Ministry and its divisions have been and remain the main support force of the state in ensuring law and order,” the President said.

The Head of State paid special attention to the human resources policy. He noted that within the Road Map on Modernization of the Police Service, departmental educational institutions were re-organized, and work on the selection of employees was improved.

“There should be no place for rudeness and unprofessionalism in the police. Dedicated people with a high level of training should serve here. The state and society expect positive changes. Law enforcement officers should be an example for citizens,” Kassym-Jomart Tokayev said.

The President also stated the need to digitalize police activities, strengthen the fight against illegal drug trafficking, and improve the state of the national penitentiary system.

“Amid the difficult socio-economic situation in the country, under no circumstances should we allow the strengthening of criminality and the spread of the prison subculture. It is obvious that the situation here is not well. Some questions remain about the execution of non-custodial sentences. The Ministry should demonstrate real results in solving the issues of the penitentiary system,” the Head of State believes.

In his speech, President Tokayev announced that next year, on the occasion of the 30th anniversary of Kazakhstan’s Independence, in accordance with the law, an Amnesty will be granted for those brought to criminal responsibility for crimes that do not pose a serious threat to the security of citizens and the state as a whole.

In addition, Kassym-Jomart Tokayev instructed the Government to deal with the construction of a new building of the Nur-Sultan’s Police Department.

The Head of State outlined comprehensive support of the staff as one of the main tasks. He reminded that more than 15 billion tenge is allocated annually for housing compensation for law enforcement officers. From January 1, 2020, an additional 10 billion tenge will be allocated for these purposes, so this support measure will cover employees of duty stations, guard services, specialized security organizations, departmental educational institutions and the criminal enforcement system, a total of more than 8 thousand people.

President Tokayev noted the low level of salaries in the Ministry of Internal Affairs, which has persisted for many years. In this regard, he announced his order to the Government to increase the salaries of law enforcement officers by 30% within 3 years.

Kassym-Jomart Tokayev also highlighted the importance of police work during the COVID-19 pandemic, which has become a serious test for the entire public administration system.

“In the current conditions, it is the police officers, who are on the “front line” together with our medical workers. After all, today your work depends not only on the safety of our citizens, but also on their health and well-being. Therefore, in this difficult time, the state will support all those who resist the pandemic. On my instructions, during the first wave of the pandemic, 6.6 billion tenge was allocated as bonuses for employees of the Internal Affairs bodies involved in quarantine measures. Additional 11.5 billion will be provided by the end of the year,” the President said.

Summing up his speech, President Tokayev stated the need for full implementation of all these tasks and expressed confidence that the Ministry of Internal Affairs will fulfil this work with honor.

Minister of Internal Affairs Yerlan Turgumbayev also spoke at the meeting and reported to the President on the criminal situation in the country, measures to ensure the safety of citizens, prevent offenses, counter organized crime, human trafficking, drug crime, and theft. He provided information on the implementation of the President's instructions on reforming the Internal Affairs bodies, measures to ensure openness and transparency of the police within the “Listening-State” concept. 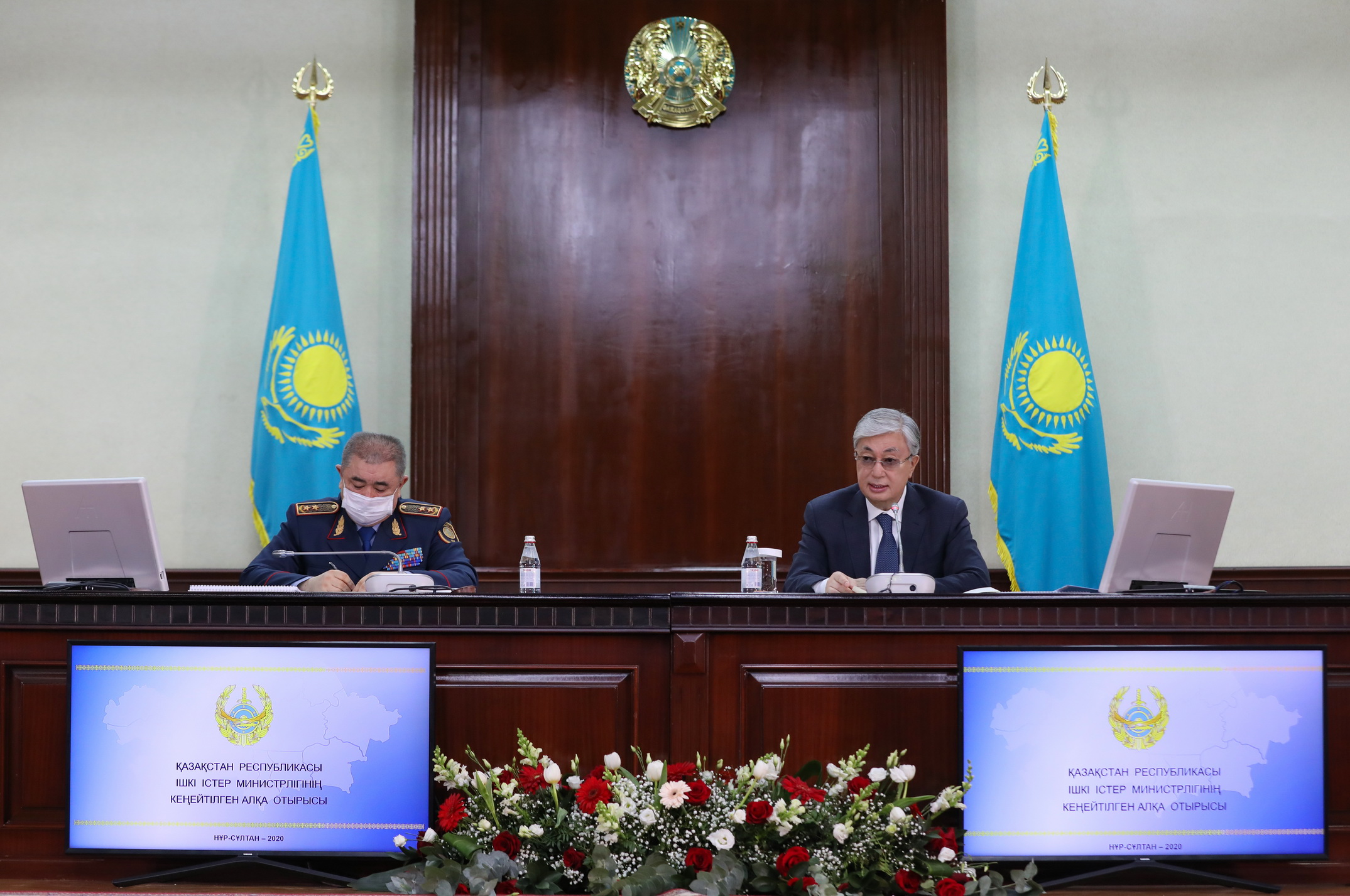 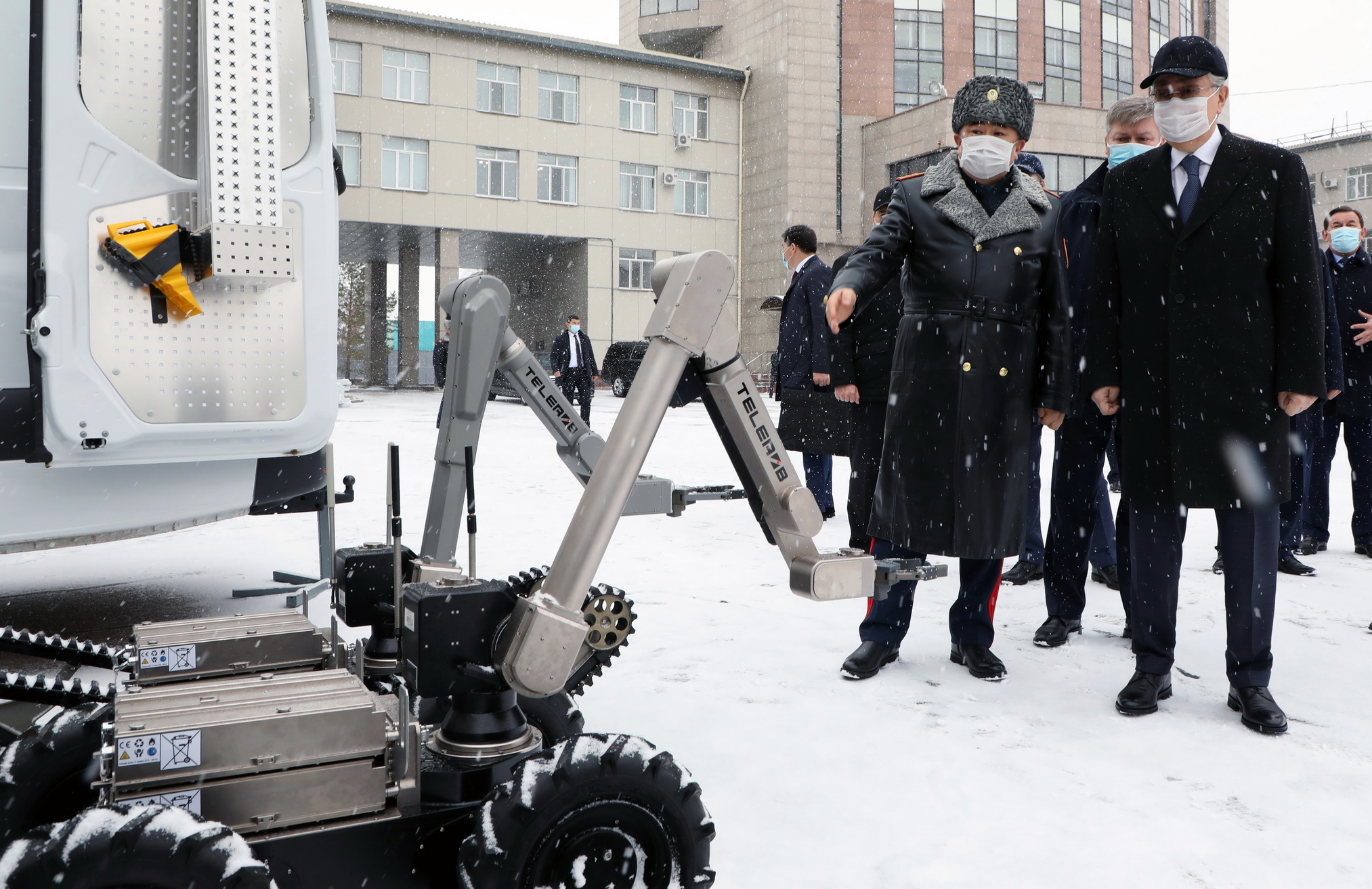 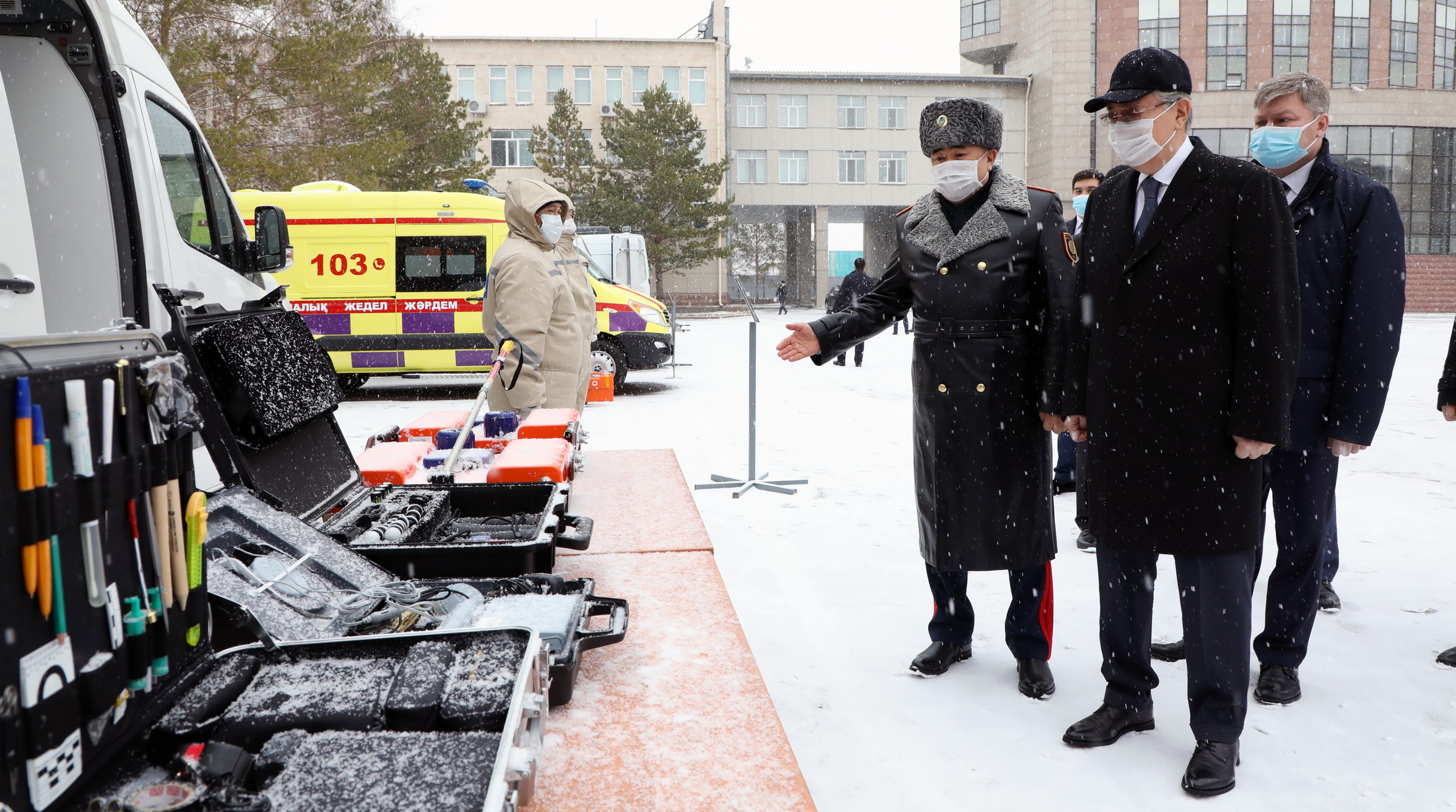 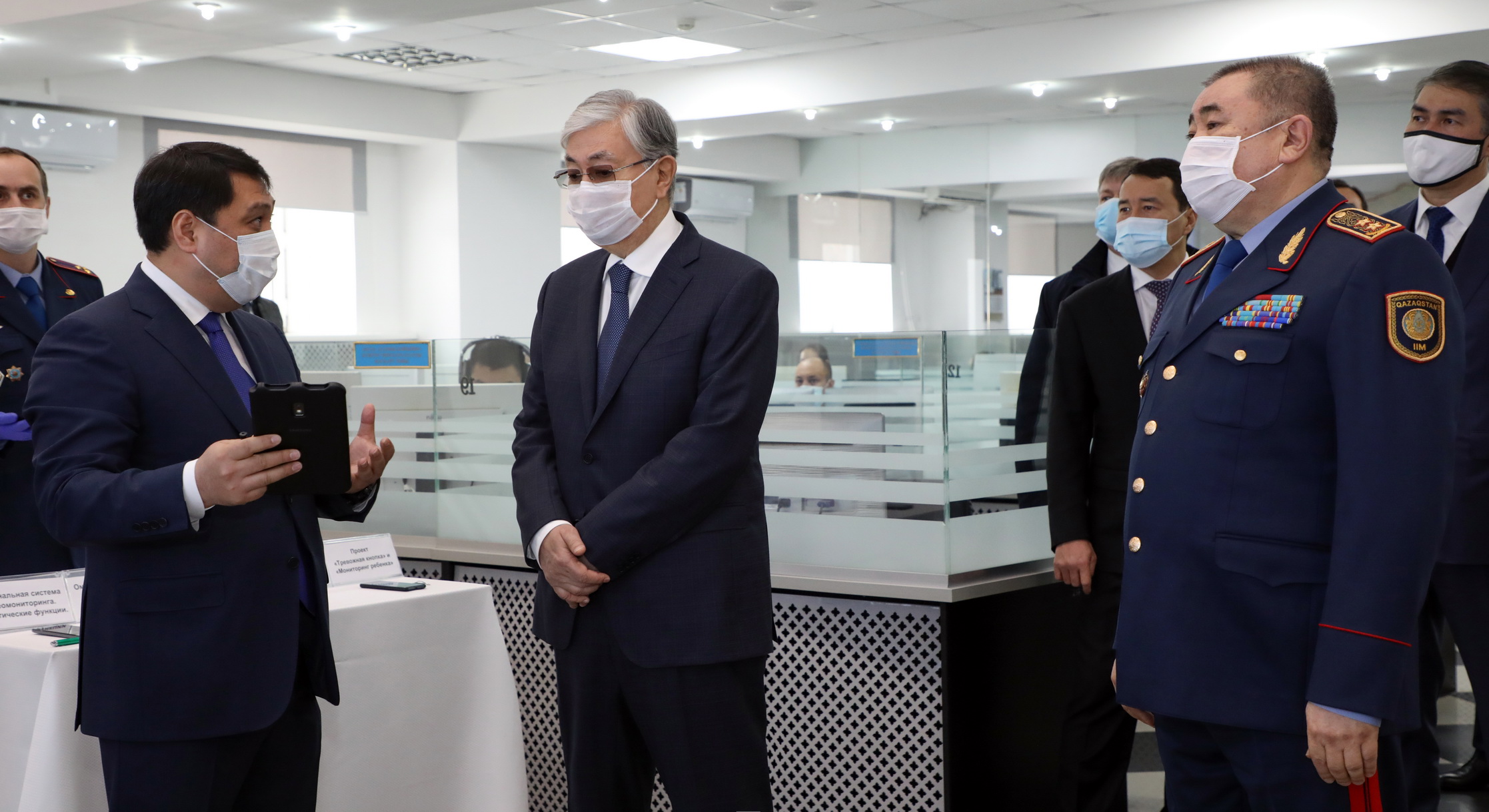 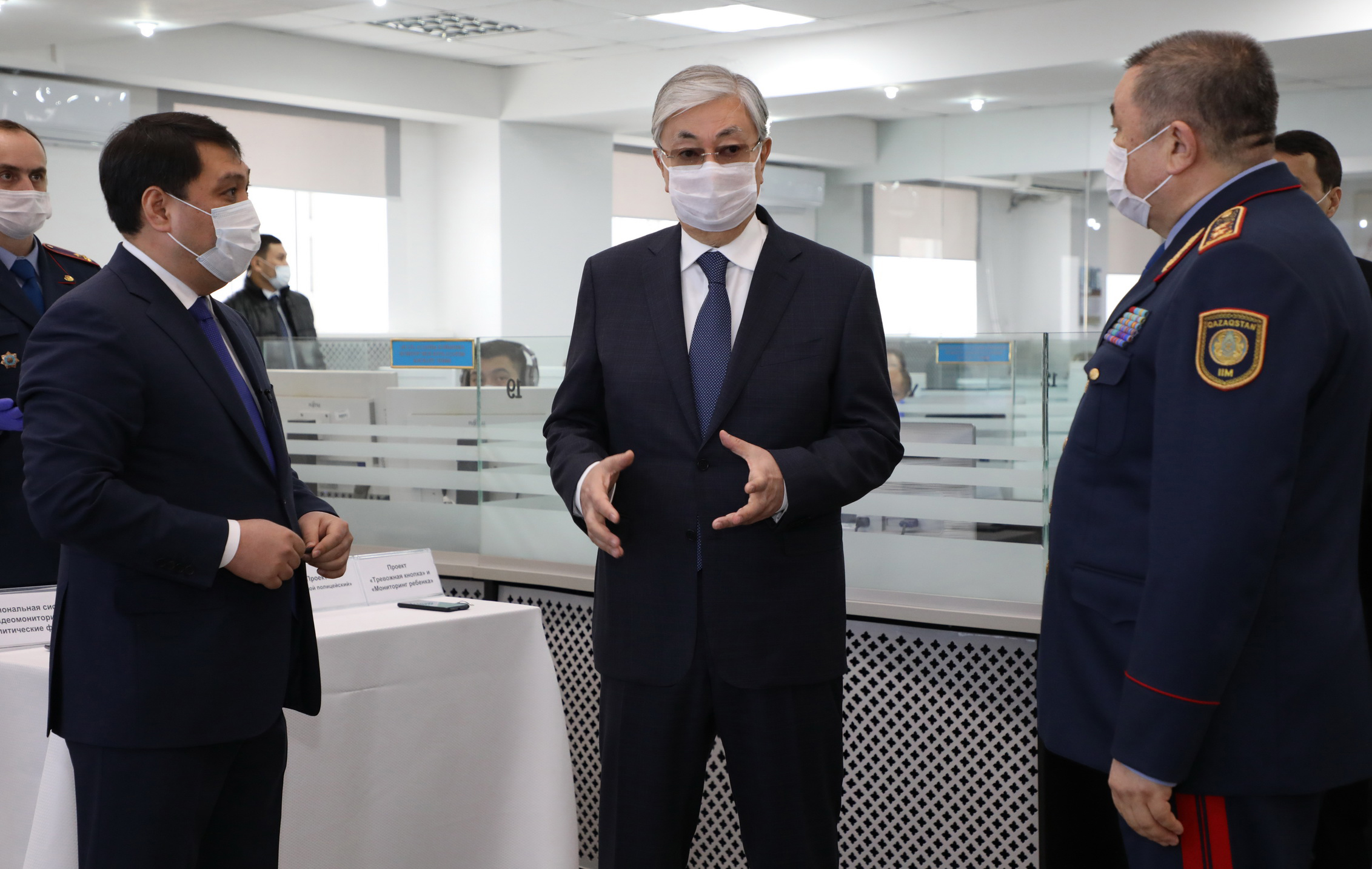 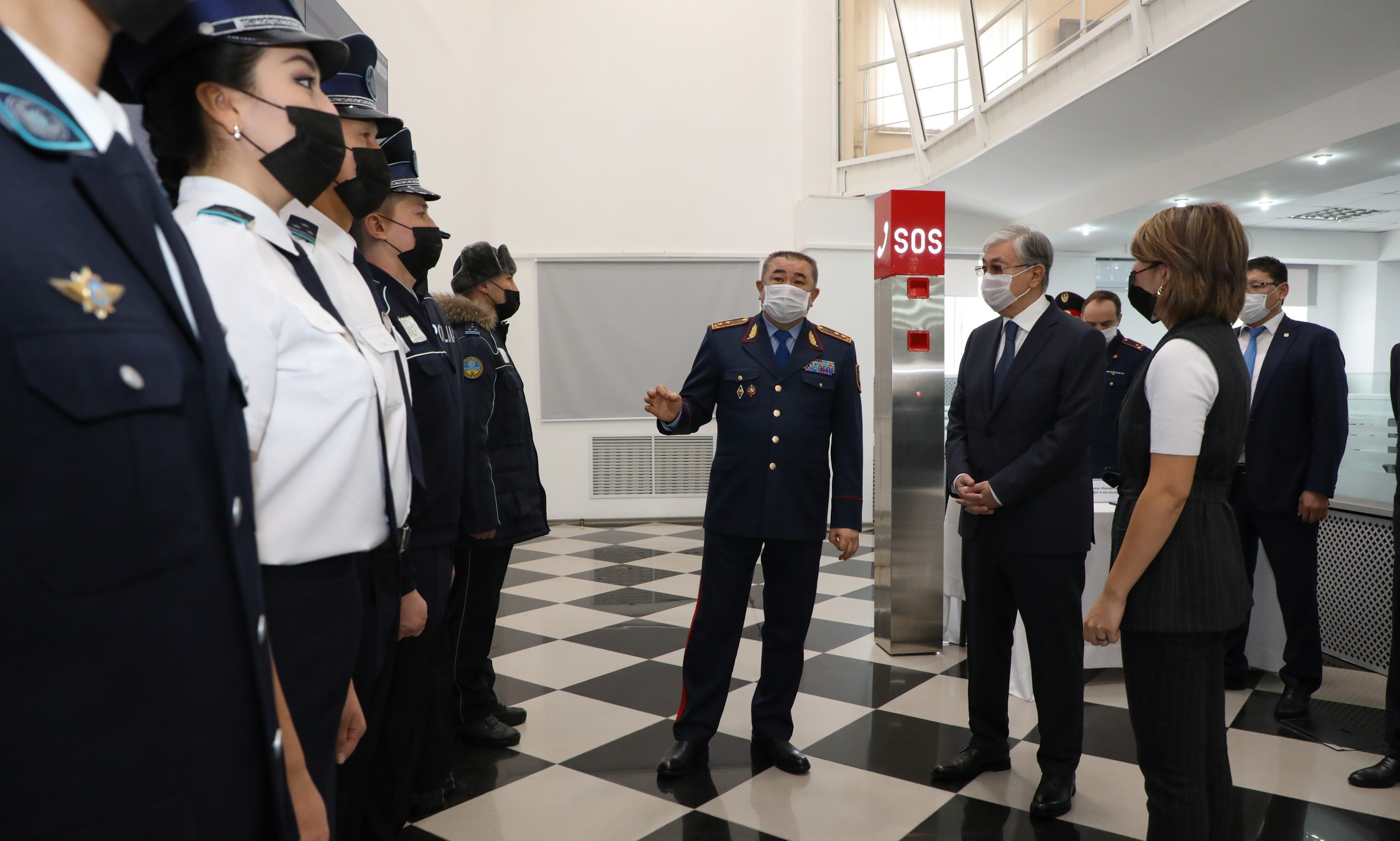 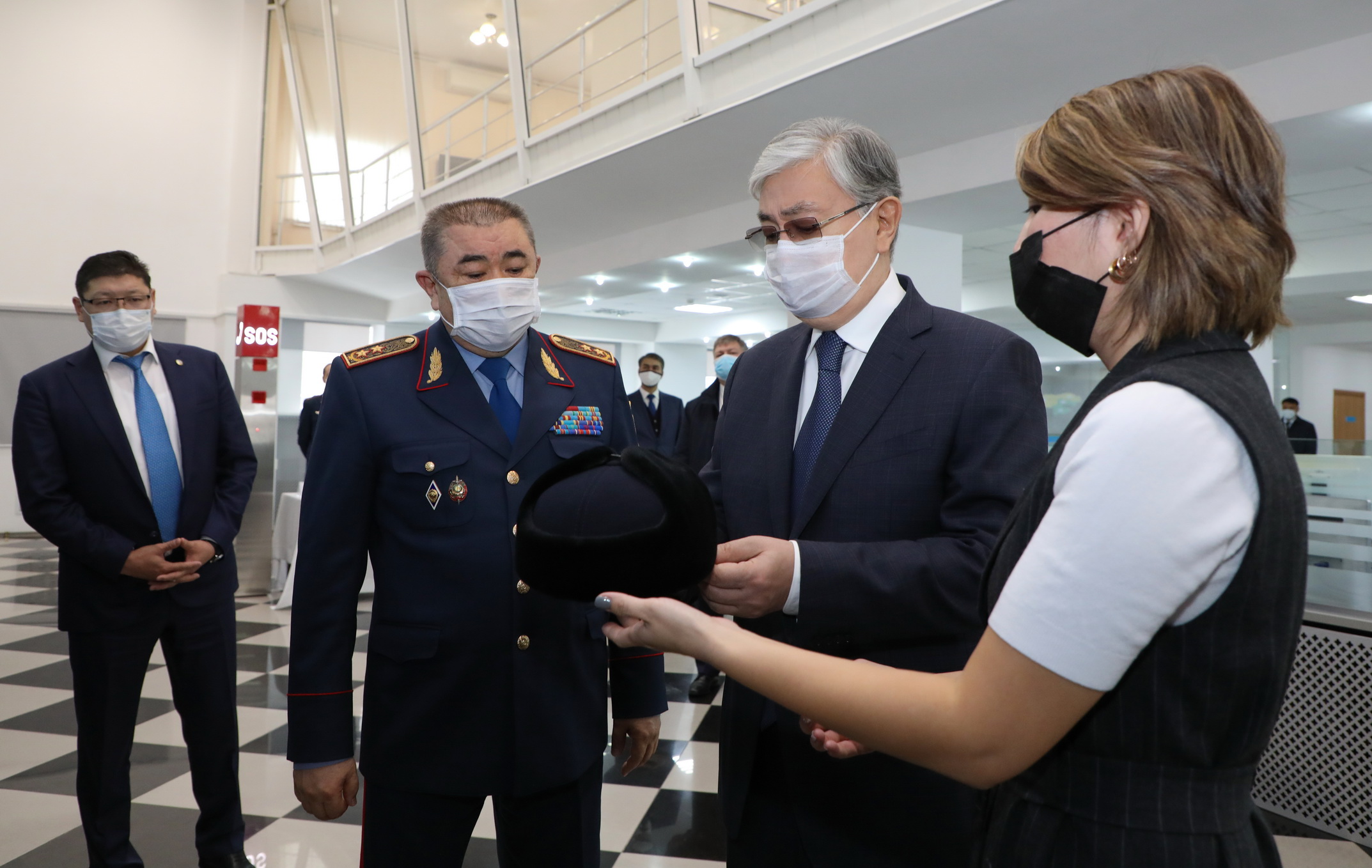 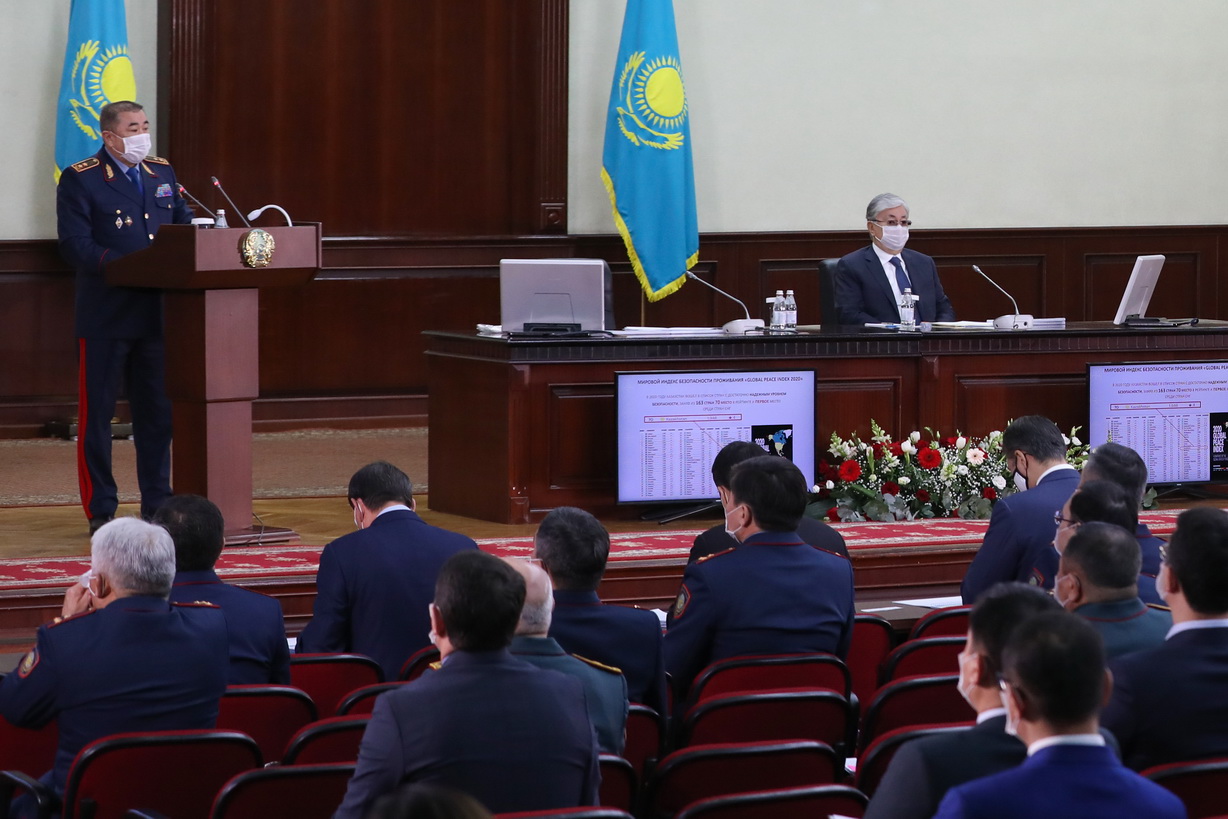 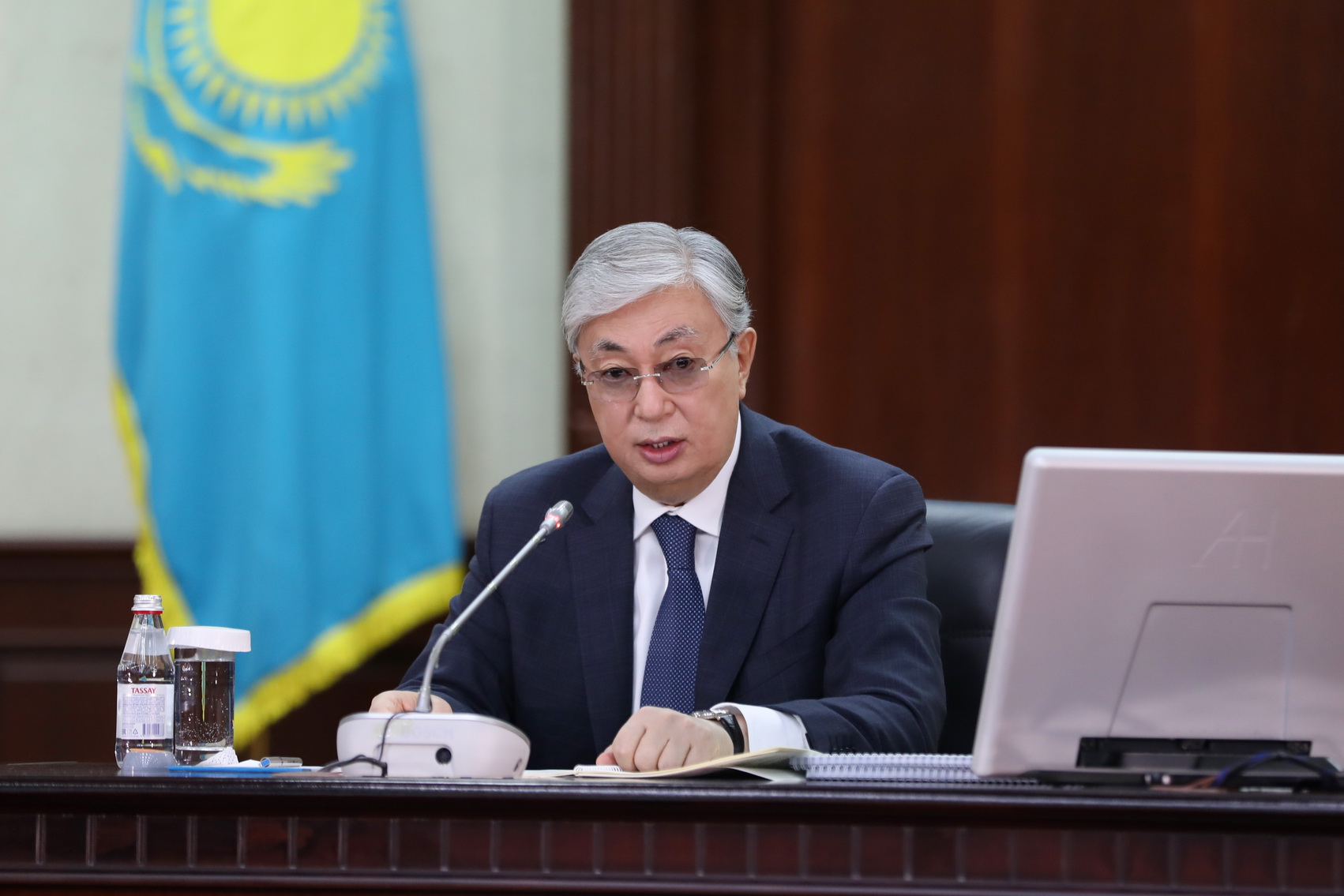 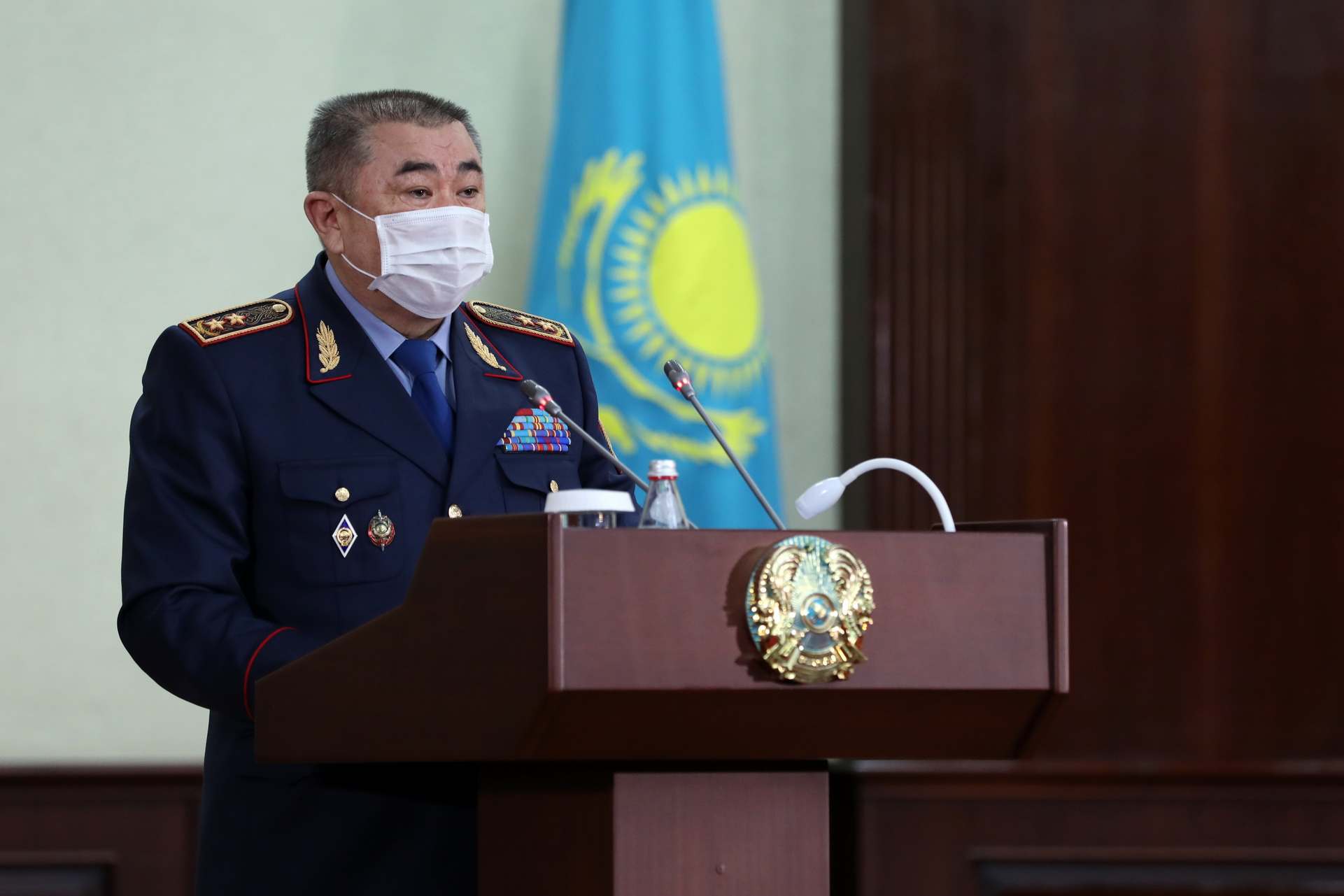 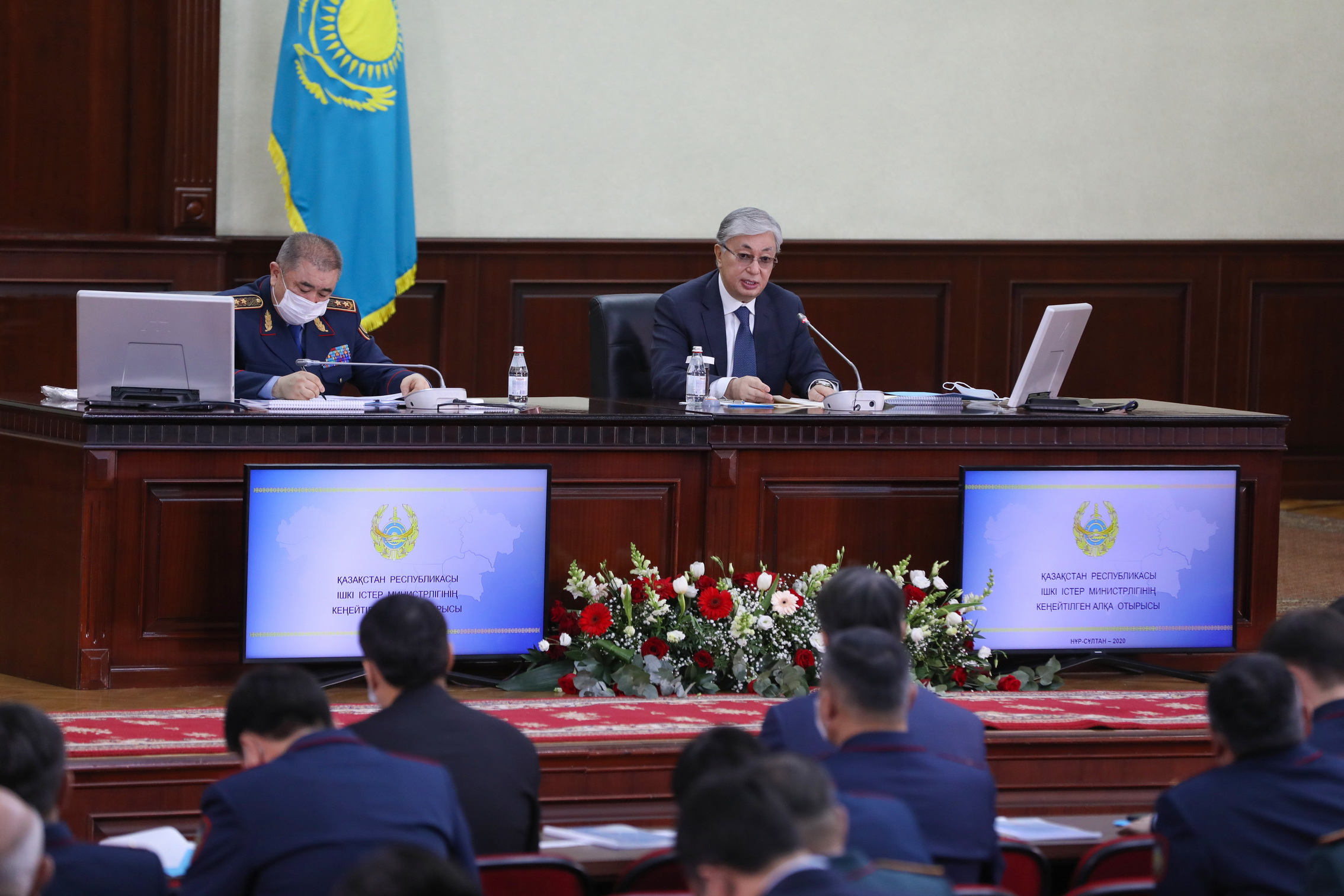 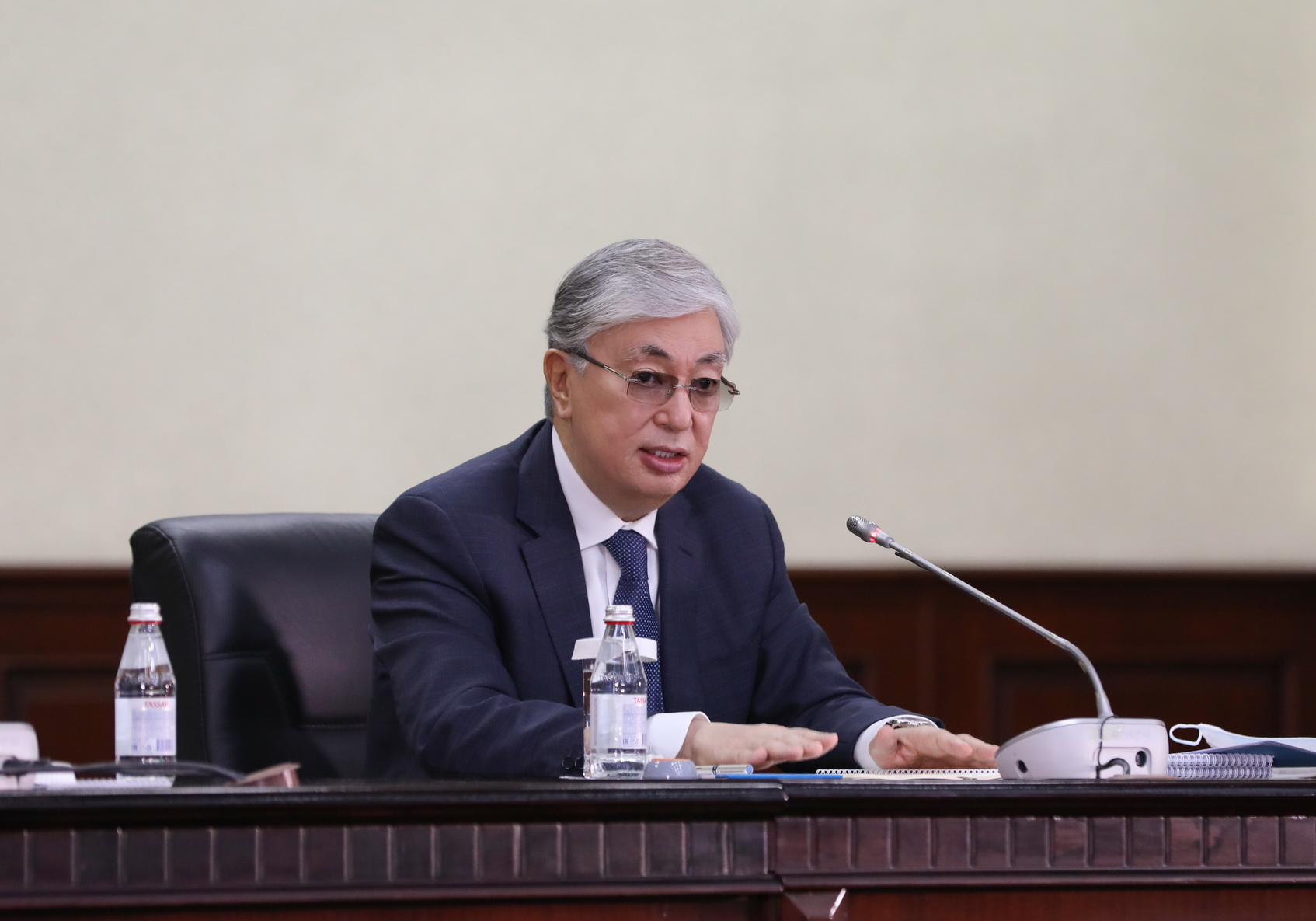 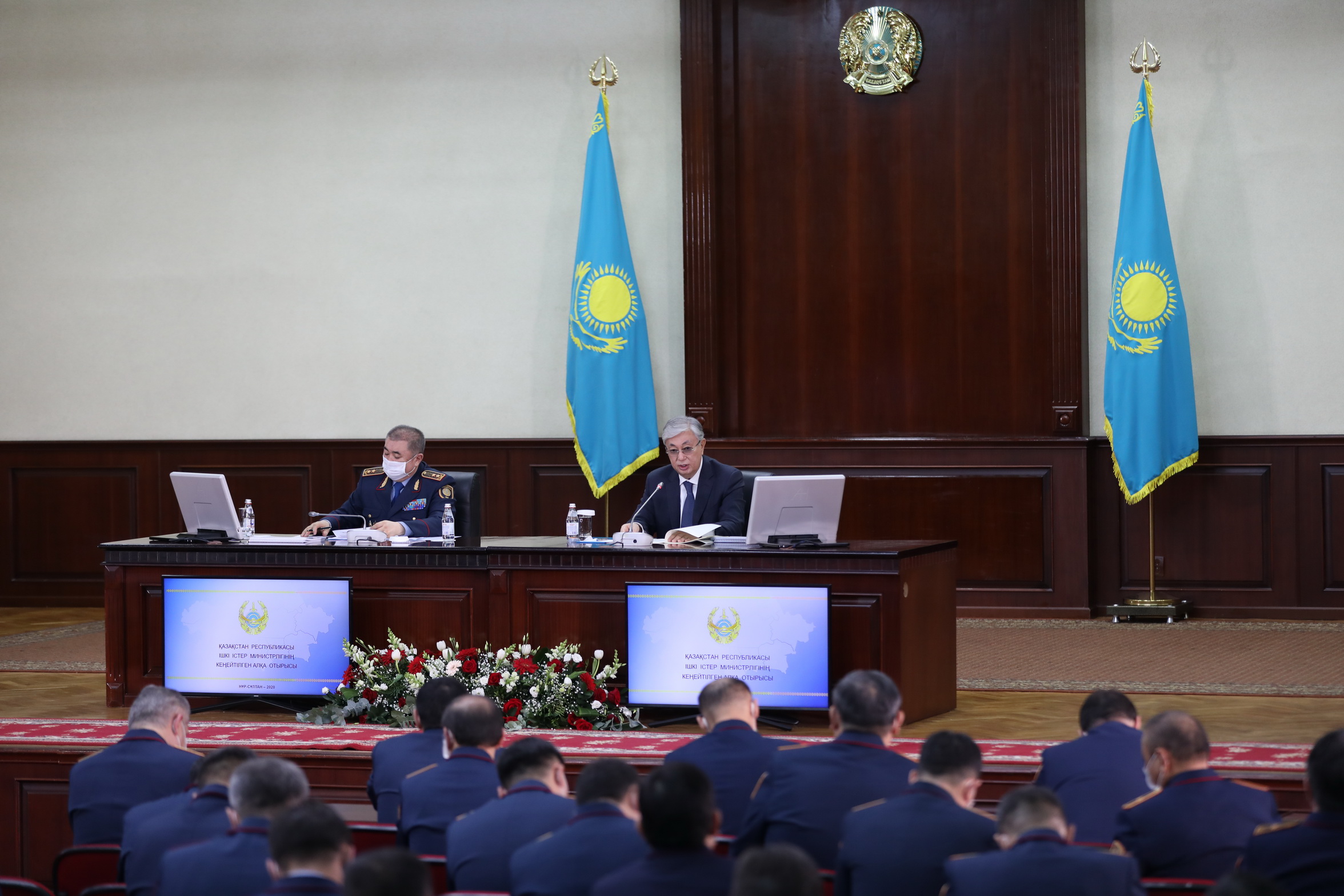 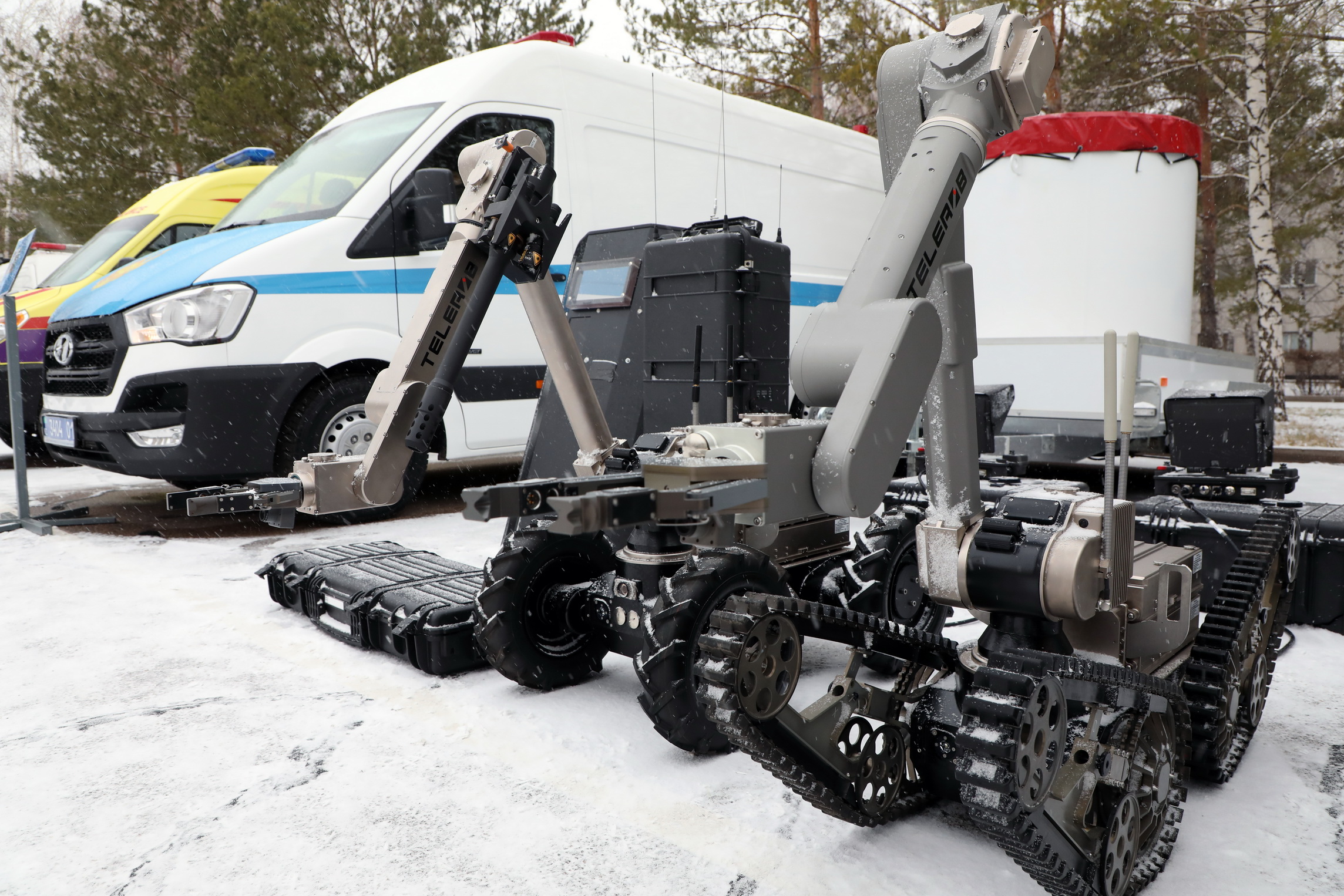 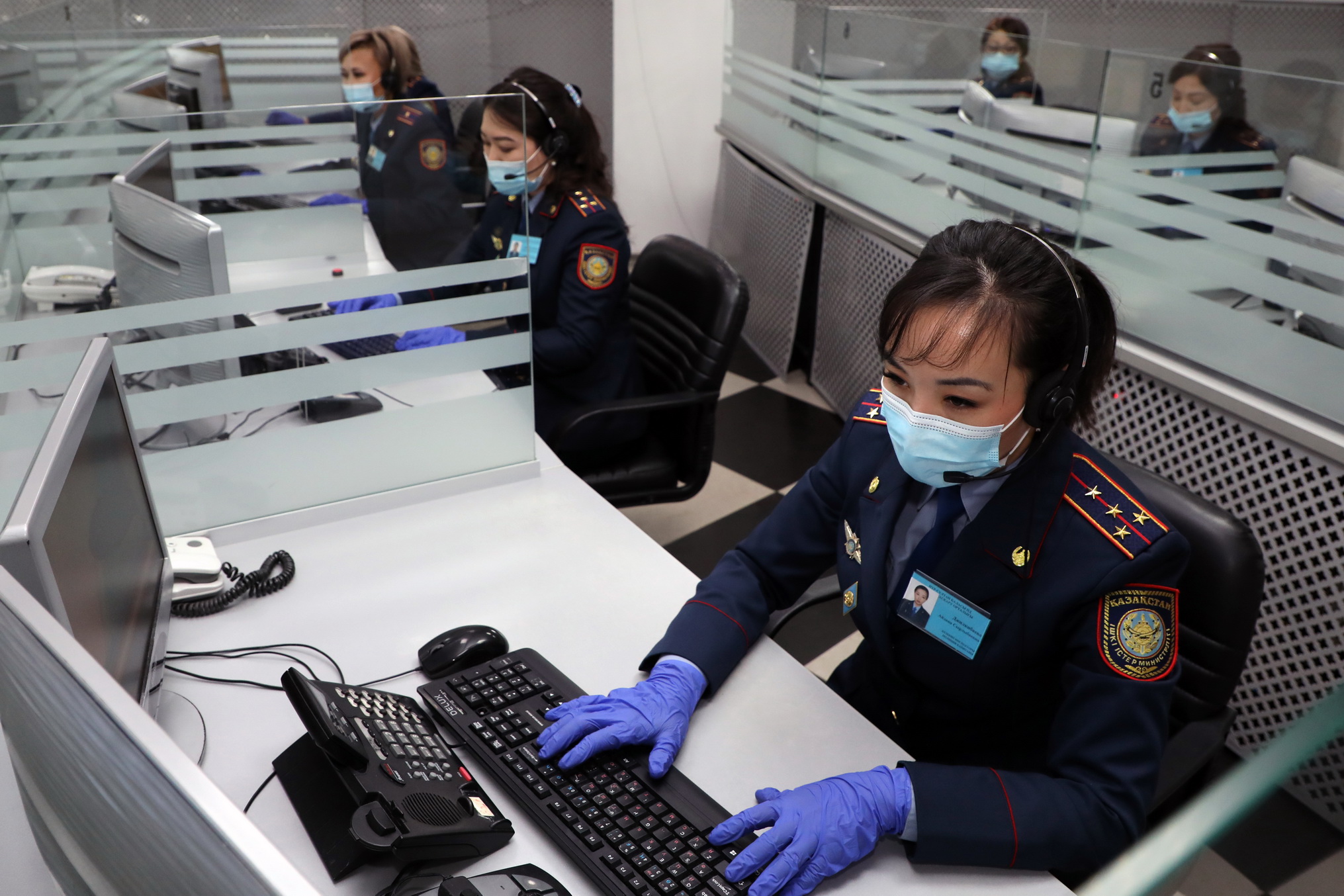 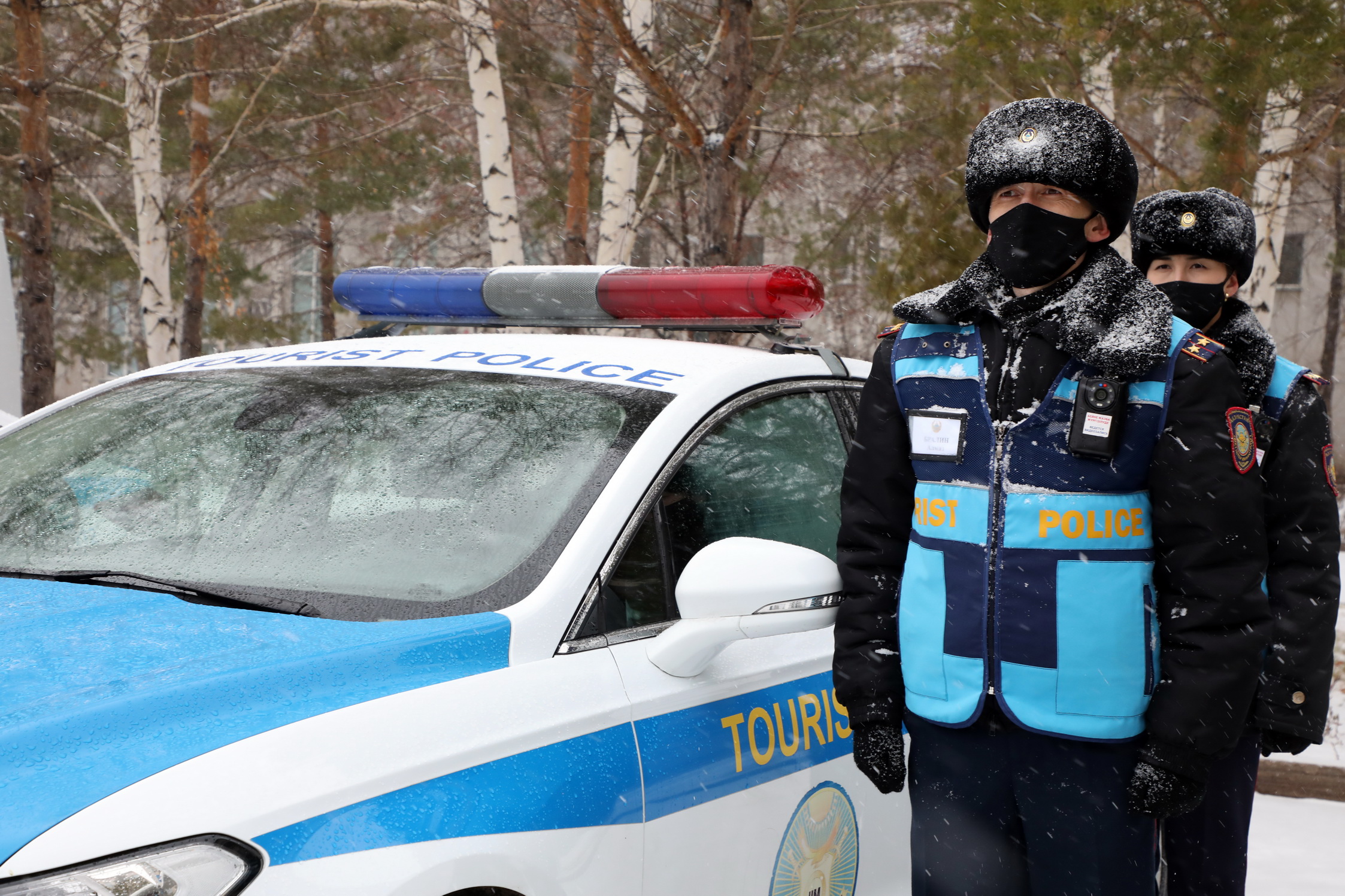