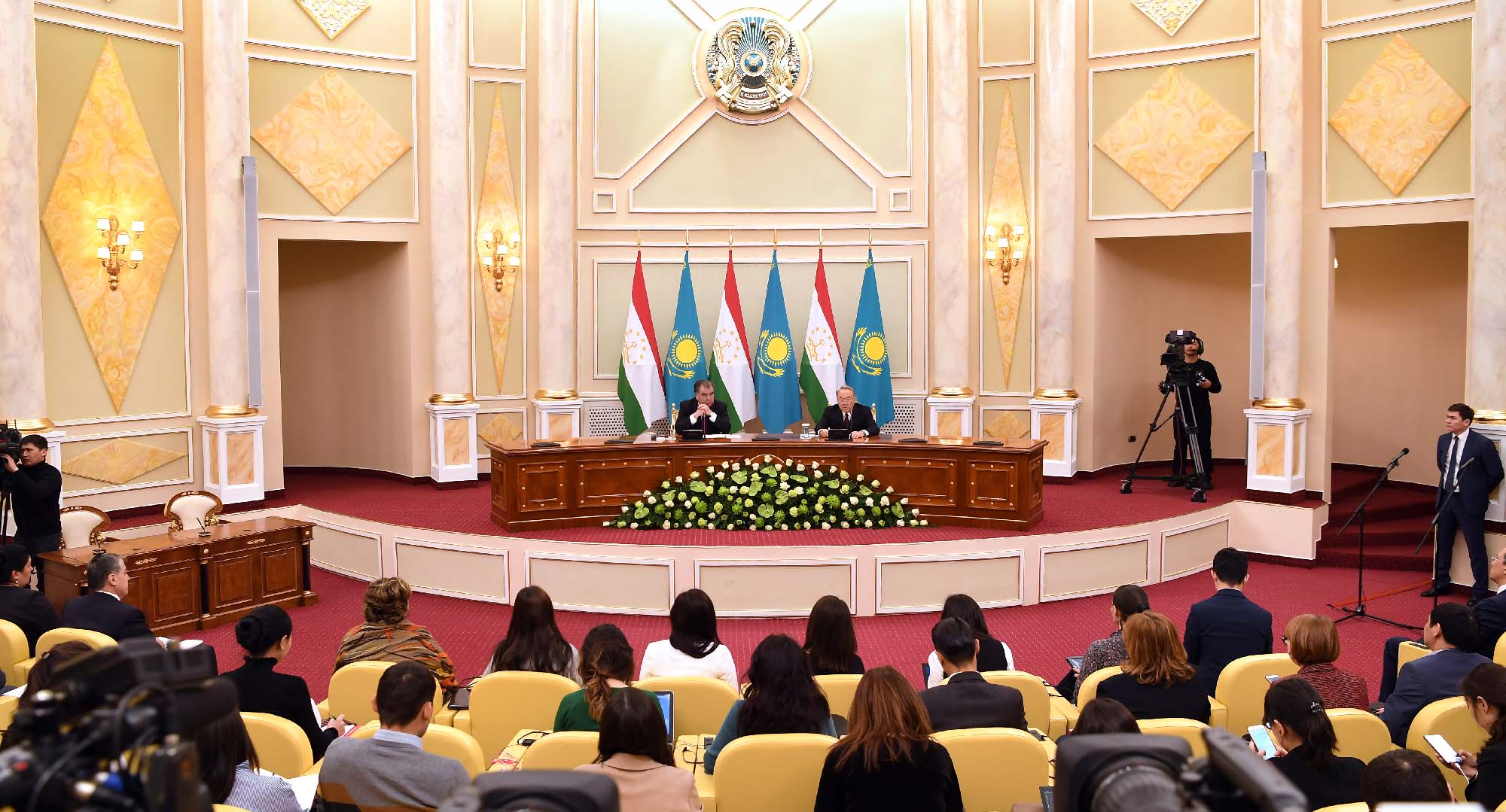 Speaking to the mass media representatives, the President of Kazakhstan stressed the strategic partnership character of relations between the two states.

Nursultan Nazarbayev noted that during the talks the sides paid special attention to the trade and economic cooperation.

- Kazakhstan is the largest export partner for Tajikistan. For us, Tajikistan is also an important trading partner. Last year, the volume of mutual trade amounted to about $ 800 million; it is an increase by more than 30%. In the conditions of the world economy’s volatility, that is a very good result, the Head of State said.

At the same time, the President of Kazakhstan placed greater focus on the present potential capacity for further deepening of bilateral economic ties. During the talks, the two presidents pointed out the importance of expanding the commodity nomenclature and adopting the Road Map to increase bilateral trade turnover.

- As a successful example, we can note the ongoing deliveries to Tajikistan of Kazakhstan's passenger cars, railway locomotives, as well as the whole range of railway equipment. In turn, Kazakhstan is interested in importing fruits, vegetables and processed products from Tajikistan, the Head of State said.

- In this context, we have talked about the possibility of opening flights between Astana and Dushanbe. A promising area for further cooperation is cooperation in the space and digital technologies, the President of Kazakhstan said.

The Head of our state underlined the special role of the Kazakh-Tajik Intergovernmental Commission on Economic Cooperation to implement the agreements reached between the two countries.

Nursultan Nazarbayev dwelled on the results of the talks on water and energy matters.

- We have once again confirmed the similarity of the positions in the use of water resources of Central Asia's Transboundary Rivers. There is a need for finding mutually beneficial solutions. A special role in this issue belongs to the International Fund for Saving the Aral Sea, the President of Kazakhstan said.

The Kazakh leader has also talked about the course of discussion of the regional and global agenda.

- We discussed issues of cooperation as part of international organizations, especially in the context of Kazakhstan's membership in the UN Security Council. Special attention was paid to ensuring regional security in connection with the situation in Afghanistan. In general, we have once again confirmed the common vision and similarity of Kazakhstan and Tajikistan’s positions in the international arena, Nursultan Nazarbayev said.

The President of Kazakhstan noted the importance of cultural and humanitarian cooperation between the two countries, emphasizing the significant role of the Tajik diaspora in this process.

- The Tajik people in Kazakhstan have their own national and cultural centres and are represented in the Assembly of the People of Kazakhstan. In order to strengthen relations between our nations, I have decided to assign the name of the great Tajik poet and philosopher Rudaki to one of the capital city's central streets. I am confident that this event will become another bright symbol of friendship between Kazakhstan and Tajikistan, the Head of State said.

In conclusion, Nursultan Nazarbayev expressed satisfaction with the results of the talks with the President of Tajikistan.

In turn, Emomali Rahmon has also given a positive assessment of the visit’s results and reiterated Tajikistan's interest in developing and strengthening bilateral relations.

The President of Tajikistan stresses that Kazakhstan holds leading positions in the system of international trade and economic relations of Tajikistan.

In addition, the President of Tajikistan dwelled on the results of the talks on issues of interstate cooperation in the international arena, cooperation in the cultural and humanitarian sphere, water and energy, as well as in the fight against terrorism and organized crime.

In conclusion, E.Rahmon once again expressed his gratitude to Nursultan Nazarbayev for productive meetings and constructive dialogue during his official visit to Kazakhstan.

As a result of the talks, the following bilateral documents have been inked during the official visit of the President of Tajikistan Emomali Rahmon:

- Joint Statement of the President of Kazakhstan N.Nazarbayev and President of Tajikistan E.Rahmon following the meeting in Astana 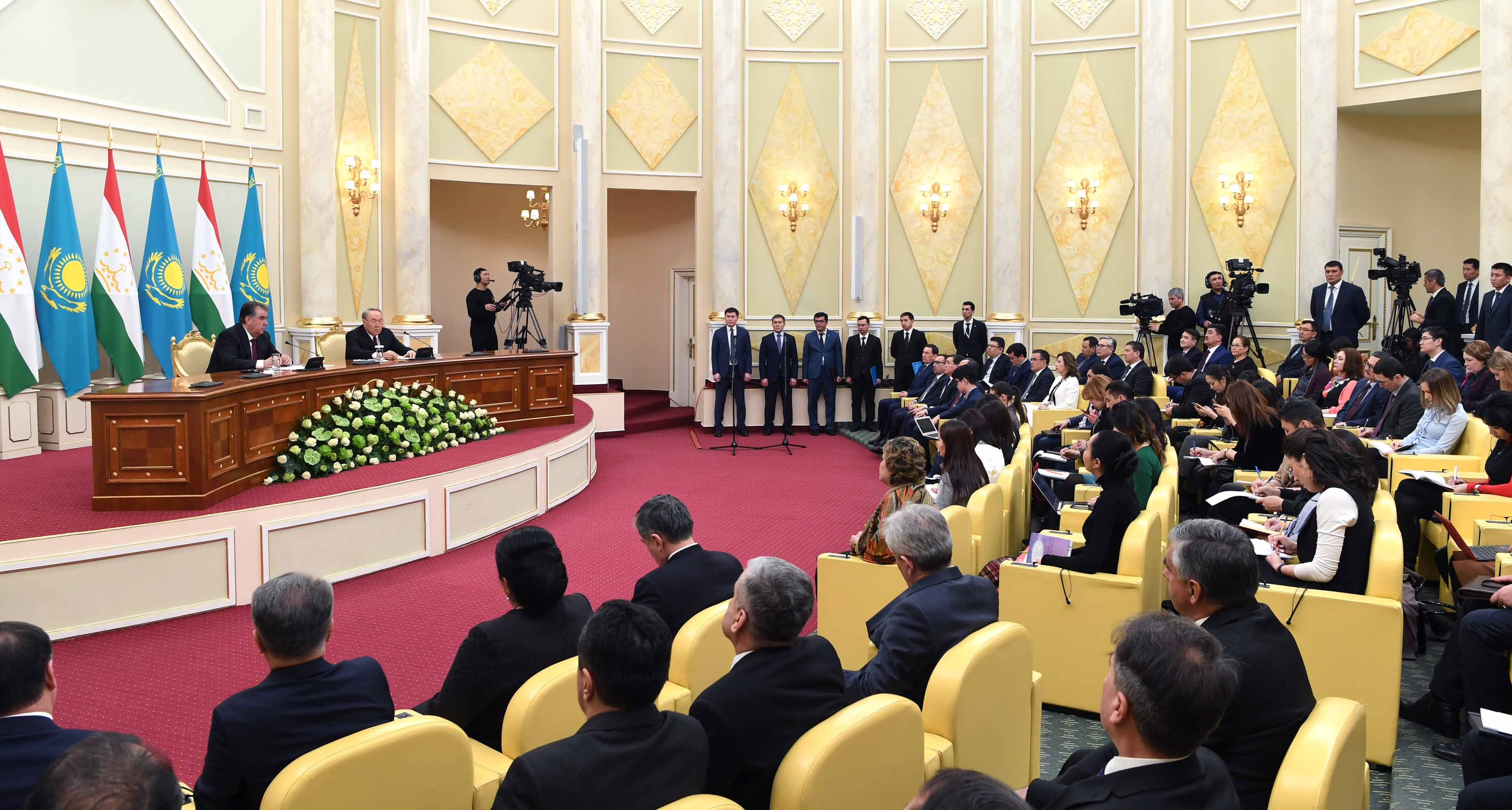