In his speech to the professors and experts of the Academy, as well as the Kazakh students, President Kassym-Jomart Tokayev noted that social sciences largely determine the development path of any state.

“The Chinese Academy of Social Sciences (CASS) is a body of national importance for China. Centers and institutes of the Academy make a serious contribution to world scientific research. It is gratifying that CASS has experts who study Kazakhstan and know the Kazakh language. I hope that the ideas and suggestions of experts will contribute to strengthening our mutually beneficial cooperation,” said Kassym-Jomart Tokayev.

The President noted that the history of Kazakhstan and China have much in common. According to him, the two nations bring together the spirit of development and the desire for progress.

“40 years ago, the leadership and people of China embarked on a wise and wide-ranging transformation. Thanks to these reforms, China occupies the leading position in the world. Over 30 years, Kazakhstan has also passed a difficult but impressive way from a deep systemic crisis to sustainable growth,” the Head of State underscored.

Recalling that he began his diplomatic career in Beijing, where he witnessed the implementation of an effective policy of reform and openness of Deng Xiaoping, Kassym-Jomart Tokayev congratulated the audience on the 70th anniversary of the PRC. The Head of State believes that this significant date is an important milestone for achieving one of the main goals of the Chinese leadership – building a middle-class Chinese society "Xiaokang".

At the same time, he stressed that due to the accelerated modernization in a short historical period, Kazakhstan became one of the 50 developed countries and keeps implementing the national development strategy until 2050.

“Our goal is to enter the club of 30 most developed states. We have a lot of work to do in multiplying our achievements and moving to a qualitatively new level of state development,” said the President of Kazakhstan.

As one of the major concerns of his country, Kassym-Jomart Tokayev called further strengthening of the country's independence, its economic potential, development of human capital, consistent improvement of the people’s welfare. According to him, it is necessary to fully implement the modernization program, developed by Nursultan Nazarbayev. The President reaffirmed that the key principles of Kazakhstan’s foreign policy will be preserved. On the international arena, the Republic of Kazakhstan will continue to strengthen friendly relations and develop mutually beneficial cooperation with its neighbors and other partners willing to support Kazakhstan.

“First of all, it concerns friends, and China is one of the closest states to us, one of the first to have recognized the sovereignty, independence and territorial integrity of Kazakhstan. China is also one of the first nuclear powers to provide appropriate guarantees to Kazakhstan without any preconditions. Our common position on the fight against the "three evils forces" - religious extremism, separatism and terrorism - contributed to the progressive expansion of the Kazakh-Chinese dialogue," Kassym-Jomart Tokayev said.

The Head of State dwelt in detail on the history of the formation of Kazakh-Chinese relations, outlined the priority areas of trade, economic, transport and logistics and investment cooperation. Moreover, special attention was paid to the development of cultural and humanitarian interaction.

A large part of the lecture was devoted to the analysis of contemporary international relations. The President believes that the danger today is the erosion of international law and the weakening of the role of global institutions.

“The tension in relations between states, the breakdown of the previous mechanisms of security and arms control, the growth of conflicts - all this is a new geopolitical reality. Unfortunately, we see a number of critical circumstances that exacerbate already complex international dialogue,” stressed Kassym-Jomart Tokayev.

In particular, the Head of State attributed the transition of geopolitical competition to the economic plane to such circumstances, as a result of which the imbalance in the global economy may increase and inequality between states may grow.

In addition, the President noted the danger of maintaining hotbeds of conflict in many parts of the world. He said that the predominance of power approaches in defending their interests increases the risk of military clashes.

According to Kassym-Jomart Tokayev, the issues of international terrorism and the proliferation of WMD remain on the global agenda. The presentation provided a detailed overview of Kazakhstan’s initiatives and practical actions to address these issues.

“Our country has developed a unique political document - a Code of Conduct towards Achieving a World Free of Terrorism. Kazakhstan has also contributed to the conclusion of the Joint Comprehensive Plan of Action (JCPOA) by providing a platform for negotiations in 2013. We remain committed to facilitate the search for compromise. As a country that has renounced the world's 4th largest nuclear arsenal, we are ready to share our experience in the process of denuclearization of the DPRK,” the Head of State underscored.

The President expressed the opinion that the current global confrontation is no less, and perhaps even more severe than the period of bipolar rivalry. Kassym-Jomart Tokayev believes that if earlier it was the enmity of the two political systems and ideological blocs, but now the confrontation is growing along the line of national and strategic interests of the main states.

The Head of State noted the need to consolidate the efforts of the entire world community to address the existing problems. The President stressed the special role of the UN in this process and its lack of alternative as a universal organization.

“Kazakhstan supports the UN and will contribute to its activities. We believe that UN reform should increase its effectiveness and credibility. As the non-permanent member of the UN Security Council, Kazakhstan actively called for a "reset" of relations in the security sphere. I am convinced that China is able to have a constructive impact on strengthening the importance of the UN. As a permanent member of the UN Security Council, China plays an important role in this Organization,” said Kassym-Jomart Tokayev.

Concluding the lecture, President Tokayev outlined the position of our country, according to which Kazakhstan and China, as neighbors and strategic partners should move together towards progress and prosperity. The Head of State expressed confidence that the search for new profitable areas of strategic partnership between both countries will contribute to further strengthening cooperation between the "think tanks" of the two states, the expansion of the practice of joint conferences and applied research. As an example of productive cooperation with the CASS, Kassym-Jomart Tokayev cited the famous Kazakh historian-orientalist Klara Khafizova.

After the lecture, Kassym-Jomart Tokayev met with the Kazakh students studying in China and made a memorable photo with them. 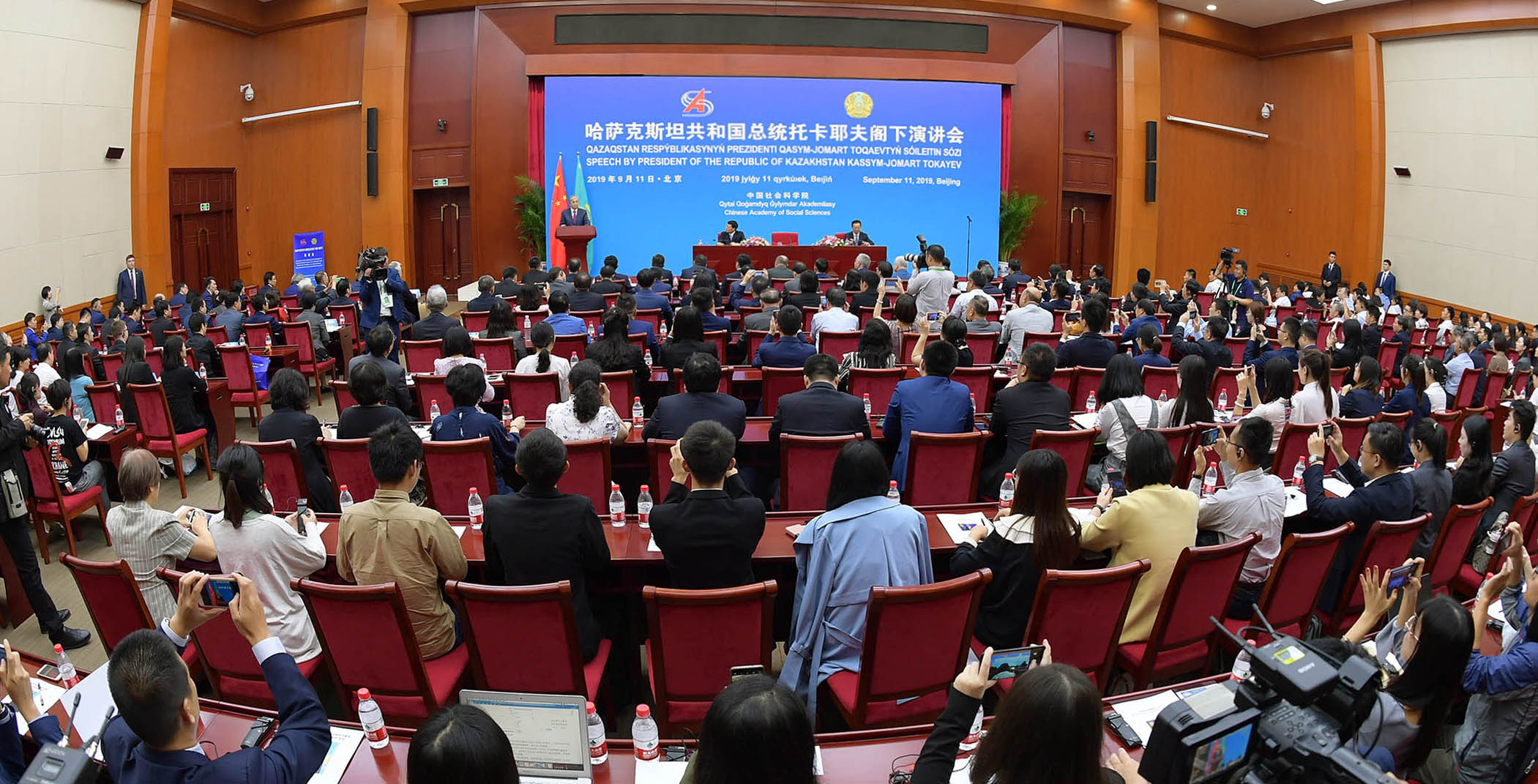 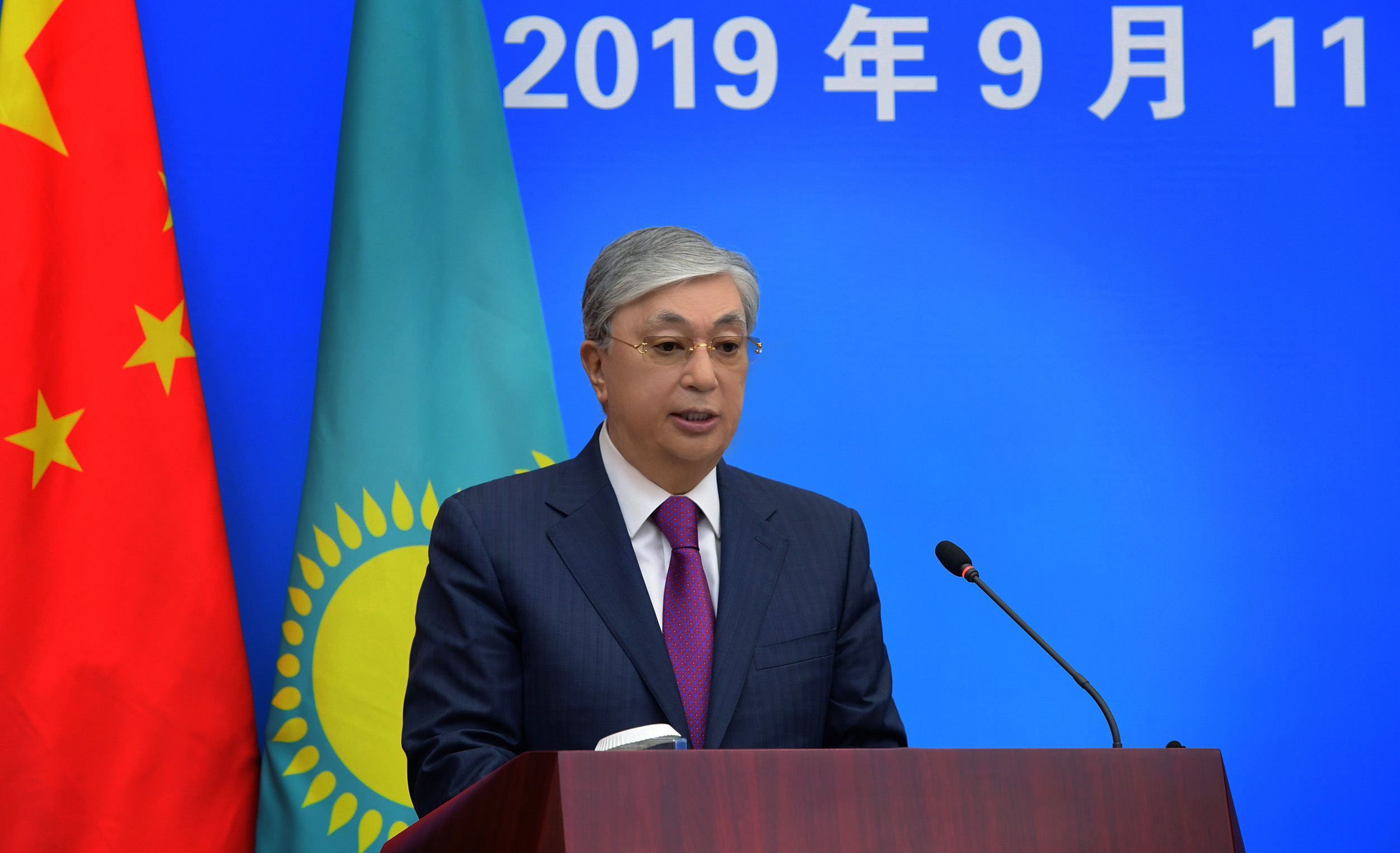 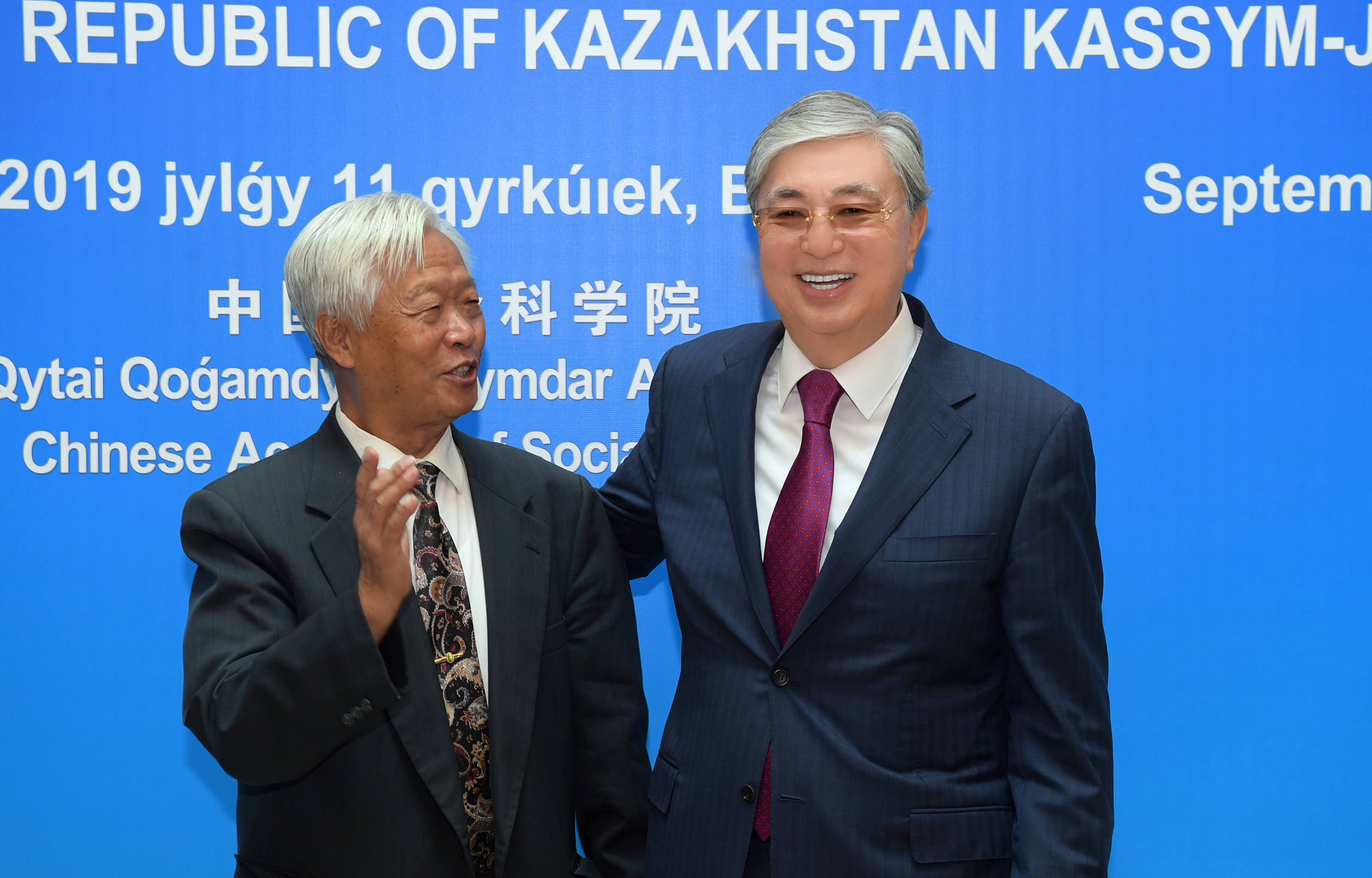 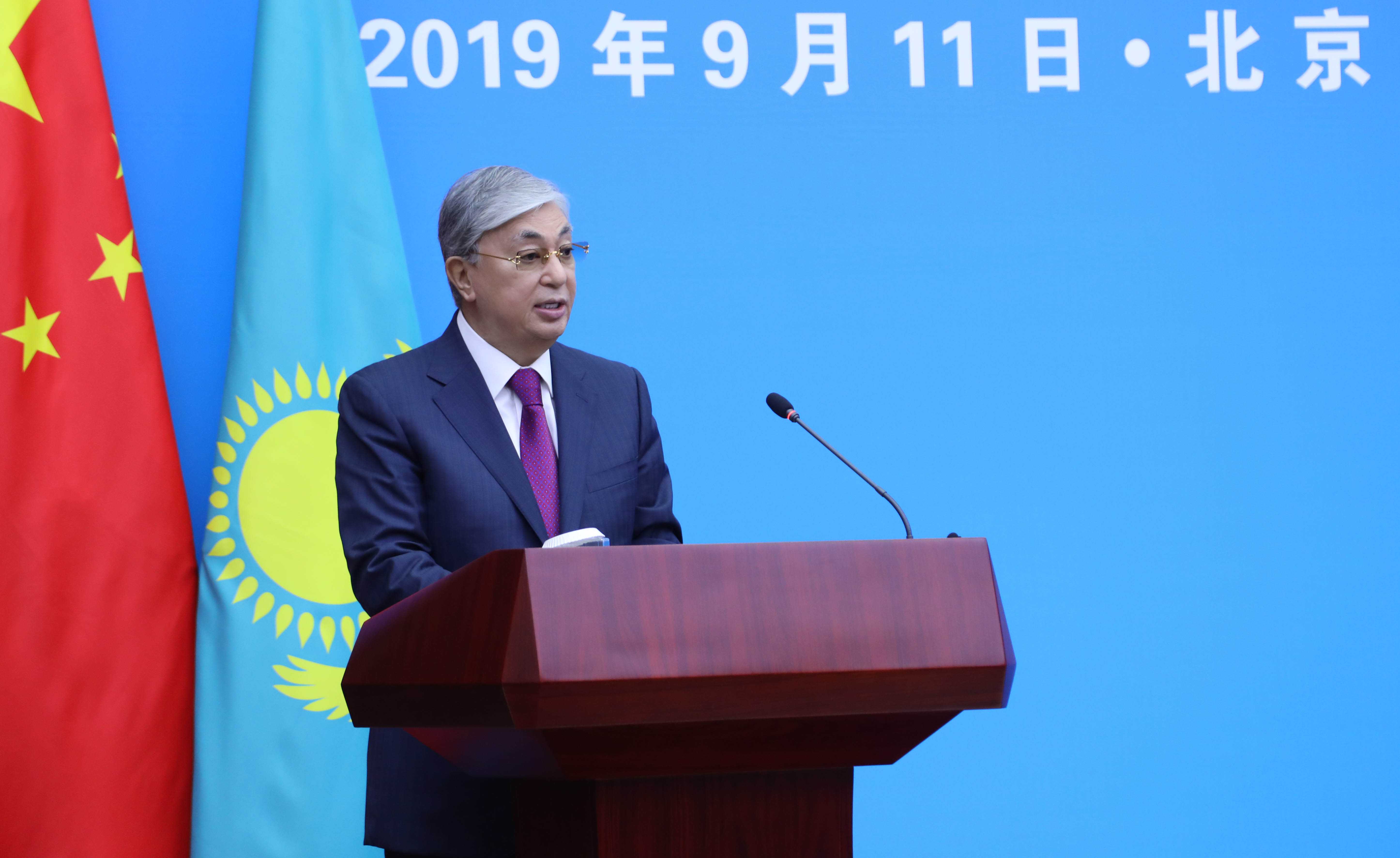 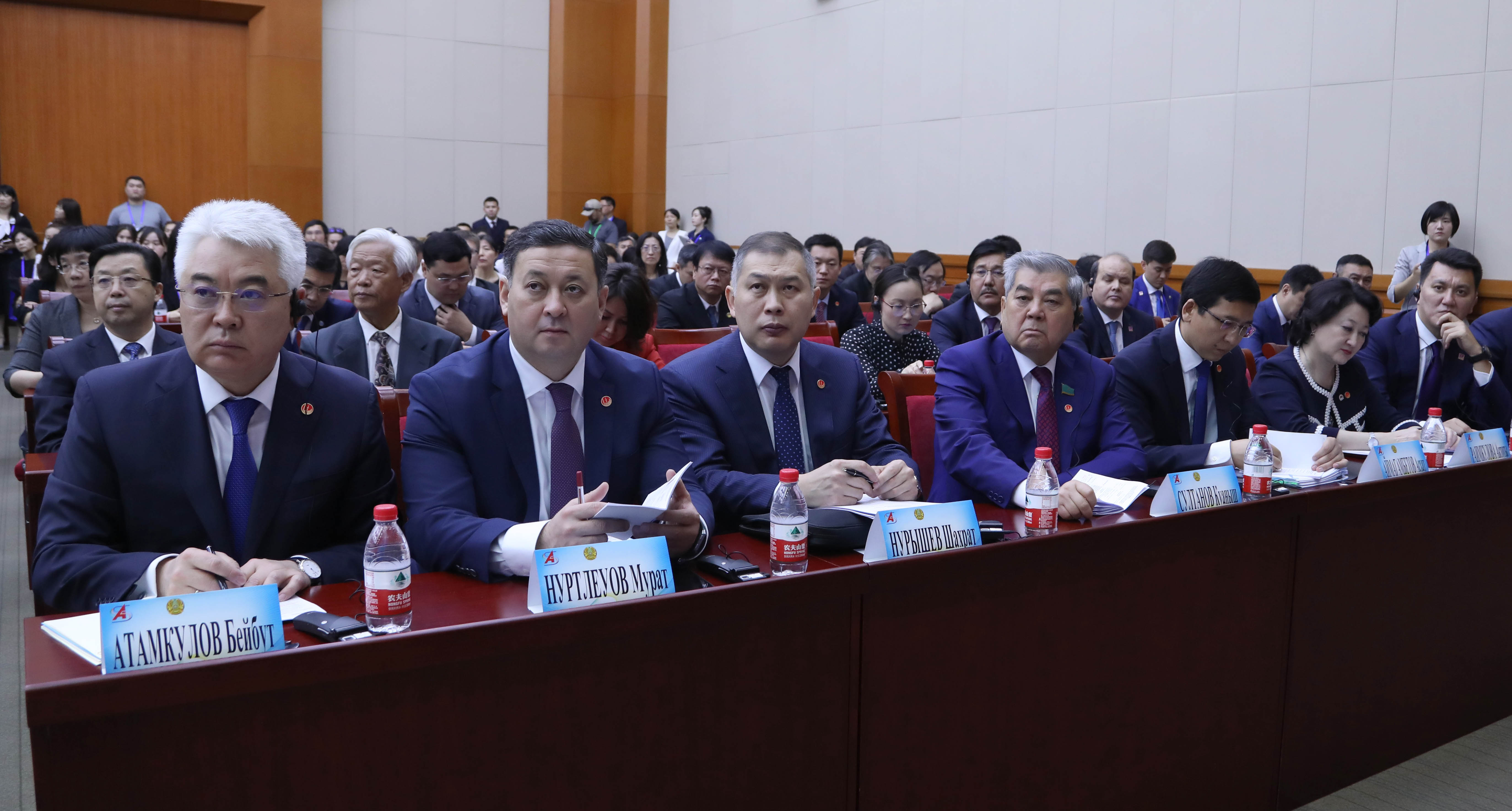