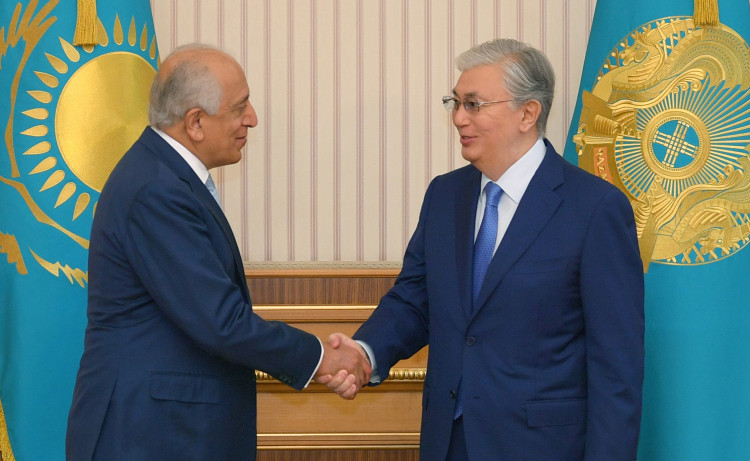 The President receives the U.S. Special Representative for Afghanistan Reconciliation Zalmay Khalilzad, who arrived in Kazakhstan on a working visit.

During the meeting, they discussed the prospects for the development of the Kazakh-US enhanced strategic partnership in the context of ensuring security and stability in Afghanistan, including in the light of the withdrawal of US and NATO troops from this country. In addition, they touched upon the coordination of bilateral and multilateral efforts for the stabilization and socio-economic reconstruction of the Afghan state.

Welcoming the American diplomat, the President noted that his visit is important in terms of maintaining high-level dialogue between Kazakhstan and the United States.

“This year we are marking the 30th anniversary of our Independence. During this period, we managed to build relations of friendship and mutually beneficial cooperation. The United States is a strong partner of Kazakhstan. We are good partners in so many areas, including trade and economic cooperation,” President Tokayev said.

Kassym-Jomart Tokayev called the cooperation on the settlement of the situation in Afghanistan as a matter of mutual cooperation between both Kazakhstan and the United States.

As the President stressed, the Afghan issue is always in the focus of his talks with the leaders of Afghanistan, Russia, China, Central Asian states and international organizations.

In turn, Zalmay Khalilzad expressed gratitude to Kassym-Jomart Tokayev for the opportunity to meet in person. The US Special Representative highly commended President Tokayev’s role in international efforts aimed at restoring stability in Afghanistan, as well as noted Kazakhstan’s important stabilizing role in the Central Asian region.

During the conversation, Zalmay Khalilzad shared his assessments of the current situation in Afghanistan, the vision of American diplomacy regarding the further development of the intra-Afghan peace process, and the coordination of efforts of all stakeholders on the Afghan track.