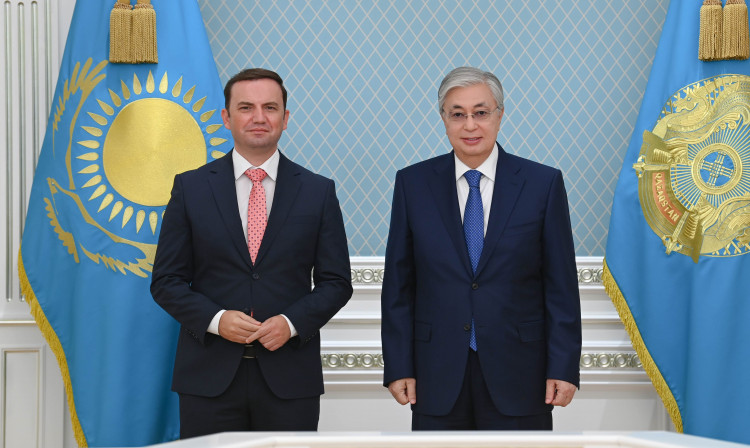 Kassym-Jomart Tokayev receives Minister of Foreign Affairs of Northern Macedonia Bujar Osmani, who is in Kazakhstan on an official visit.

Welcoming Bujar Osmani to our country, the Head of State noted that his visit is extremely important in terms of giving an additional impetus to the development of bilateral cooperation between both countries.

“We have a lot of opportunities to utilize, particularly, in trade and investment areas, humanitarian ties. We should seriously use an existing potential of developing of cooperation between both countries. We also look forward to having close interaction within the international organizations,” the President of Kazakhstan said.

Kassym-Jomart Tokayev expressed his condolences to the families of blaze victims at COVID-19 hospital in the city of Tetovo, which caused many human casualties.

During the talks, Kazakhstan President paid special attention to the development of the situation in Afghanistan.

Besides, the Head of State stressed the importance of ensuring the security of our compatriots permanently residing in Afghanistan. He informed Bujar Osmani about the measures taken by our authorities to return Kazakhstan citizens and ethnic Kazakhs qandas to their homeland, as well as measures to facilitate the efforts of the international community to evacuate staff of international organizations, including the UN Assistance Mission in Afghanistan.

In turn, Foreign Minister Osmani expressed his gratitude to President Tokayev for the opportunity to meet, especially noting the symbolism of the visit, which takes place in the year of the 30th anniversary of the independence of the two countries.

“I really hope that this visit of mine will open a next chapter of our cooperation. We are very much committed to deepening and strengthening our bilateral relations,” the Macedonian diplomat said.

In addition, the two stressed the priority role of the UN in consolidating international approaches in the Afghan dimension.