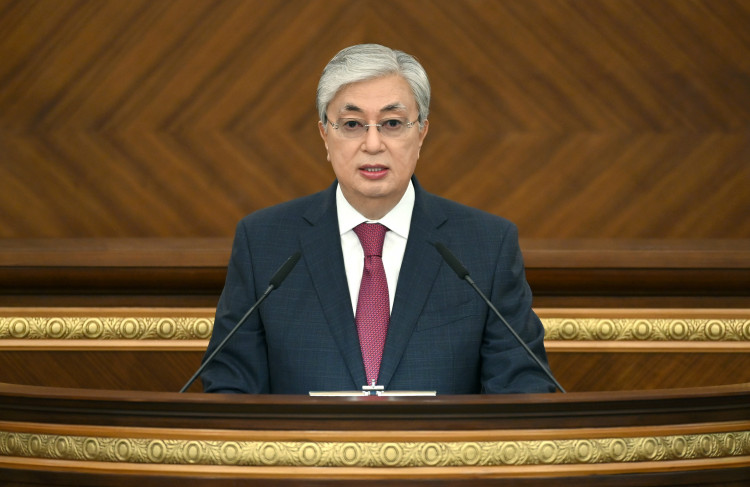 President Kassym-Jomart Tokayev delivers his State of the Nation Address

President of Kazakhstan Kassym-Jomart Tokayev delivered at a joint session of the Parliament chambers his State of the Nation Address entitled “Unity of the people and systemic reforms are a solid foundation for the nation’s prosperity”.

The President launched an array of initiatives for the post-pandemic development of the country, focusing on areas such as healthcare system effectiveness, ensuring quality education, regional policy improvement, formation of an effective ecosystem in the labour market, political modernisation, protection of human rights and consolidation of society.

While addressing the people of Kazakhstan, Kassym-Jomart Tokayev named the 30th anniversary of Independence as the most cherished treasure of our state.

“Thanks to the forward-looking policy of the First President, Kazakhstan has had notable success and became known all over the world. In unity and harmony, we were able to build a new state: this is our greatest accomplishment. We have strengthened the spirit of the nation by laying a solid foundation for development. We have become an influential member of the global community. Thanks to the stability in our society, we took the path of sustainable progress. Together we are building a strong state. Sovereignty is not just an empty slogan and a big word. It is important for us that every citizen yields the benefits of Independence, such as a peaceful life, social harmony, an increase in the well-being of the people, and the confidence of young people in the future. All our endeavours are aimed at this,” Kassym-Jomart Tokayev said.

President Tokayev, who identified the principal priorities of his Address, stressed that ensuring the well-being of the people is a key goal of his work as President.

To achieve this goal, the Head of State put forward five key initiatives.

Firstly, he announced his decision to increase the minimum wage from the current 42,500 tenge to 60,000 tenge from January 1, 2022. This measure will directly affect more than one million people, and indirectly – all the workers.

Secondly, the President announced the need to increase the wage bill which lagged behind the growth of profit for business owners by almost 60%. In this terms, the Government has been instructed to develop “soft” measures to stimulate businesses to increase the wages of their employees. Benefits through regulated procurement, as well as preferential access to government support, will be provided for employers who raise wages of employees.

The third initiative focuses on a reduction of a burden on a wage bill.

Micro and small businesses are particularly affected by this. The President proposed to introduce a single payment from the payroll with a reduction of the total burden from 34 percent to 25 percent. This will stimulate businesses to bring thousands of employees out of the shadows, who can become full-fledged participants in the pension, social and health insurance systems.

Fourthly, President Tokayev instructed from 2022 to 2025 to annually increase the salaries of a number of public sector workers, including employees of cultural institutions, archivists, librarians, and others. Around 600,000 of population will feel the effectiveness of this initiative.

Fifthly, the Head of State said that it is necessary to allow the transfer of a part of pension savings above the sufficiency threshold to an account with Otbasy Bank for the subsequent purchase of housing. In his opinion, it will stimulate the habit of accumulating funds and managing them wisely.

Addressing the members of the Parliament, who were present at the session, President Tokayev emphasized the importance of high-quality preparation of the legislation adopted. He believes that parliamentarians should always be persistent in upholding the interests of the people and each decision must be made, taking into account the needs of society and the capabilities of the state.

Summing up his Address, Kassym-Jomart Tokayev stressed the need for an effective work of the state apparatus.

“Anyone who doubts the course of the Head of State, does not cope with the work, perhaps wants to somehow sit out, or evades the implementation of the President’s instructions - it seems to me that they should leave their posts. We are now entering a decisive stage in our development. The state apparatus is obliged to function as a single mechanism. Only in this case will we ensure the achievement of the set goals,” the President stated.