The President outlines priorities of the Assembly of People of Kazakhstan

Kassym-Jomart Tokayev participated in the 31st session of the Assembly of the People of Kazakhstan (APK) titled “Unity of the people is the basis of a renewed Kazakhstan”.

In his speech, The Head of State noted the symbolism of holding the session of the Assembly on the eve of the Day of Unity of the People of Kazakhstan.

“Unity, harmony and peace are our enduring values. We clearly realized their importance during the January’s events. The tragic days are now behind us. Eventually,   we will come to understanding of the danger that we faced. In fact, we could have lost our statehood. Our people must learn the lessons of January's tragedy. We must do our utmost so that such events do not happen again,” the President said. 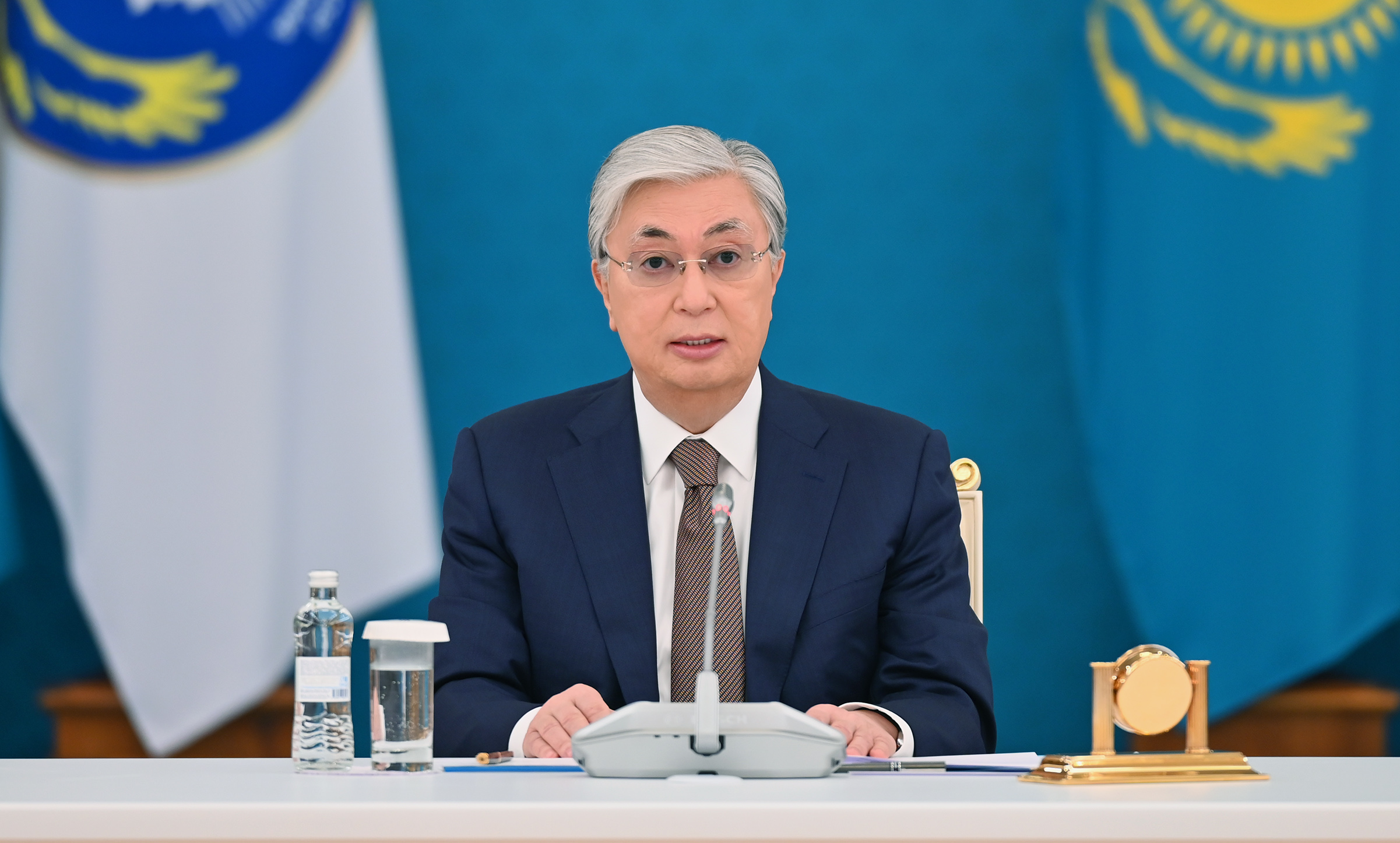 The President pointed to the tense geopolitical situation, which is leading to new challenges. In his opinion, in the current situation special attention should be paid to strengthening civic identity and fostering the spirit of patriotism.

“We will never retreat from our main principle, “Unity in Diversity”. We must educate the younger generation to be true patriots. At the same time, political and social pluralism must not be allowed to take radical forms. Moreover, any discrimination against citizens, humiliation of their honor and dignity are unacceptable,” Kassym-Jomart Tokayev said.

The President called the Assembly's undoubted merit the fact that over the years of  its existence it has contributed to the strengthening of civil unity.

“I am confident that in the new realities, the APK will continue to serve as a solid institutional pillar of our policy of peace and harmony. The objectives of today’s session are to define the Assembly's place and role in the reform of the political system and to outline the vector of its further development. We proceed from the fact that the fundamental component of political modernization is the principle “we are different but we are equal,”  the Head of State said.

In his speech, Kassym-Jomart Tokayev identified three main priorities of the Assembly of the People of Kazakhstan. The first is strengthening the role of  the APK in the implementation of political reforms.

“The abolition of the APK quota in the Majilis removes a number of existing issues related to compliance with democratic electoral standards. At the same time, Senators from the Assembly will effectively represent the entire set of interests of Kazakhstan’s ethnic groups based on nationwide integration and ethno-cultural diversity. This model adequately reflects international practice and the specifics of Kazakhstan's parliamentary system,” the President said.

The Head of State proposed to develop effective and transparent procedures for the selection of candidates from the APK to the Senate. All these issues should be reflected in the updated law “On the Assembly of the People of Kazakhstan”.

“Reform of the party and electoral systems opens up new opportunities for all citizens to participate in electoral processes. New parties are expected to emerge, covering virtually the entire electoral landscape. I am sure that party lists as well as elections of candidates in single-mandate districts will genuinely reflect the ethnic diversity of Kazakhstan. At the same time, the politicization of the interethnic factor, unhealthy and even provocative discussions on this topic must not be allowed,” President Tokayev stressed.

In this direction, he considers it necessary for the Assembly to carry out extensive outreach.

“It is fundamentally important that representatives of all ethnic groups living in our country share common civic values and associate themselves with Kazakhstan. This is our greatest achievement during the years of independence, and we must strengthen it comprehensively. The active voices of those who advocate peace and accord and the unity of the people are extremely important in the new political realities,” the Head of State noted.

The second priority is the strengthening of information work and boosting the APK’s public potential. According to the President, it is necessary that every citizen of our country, entering the public field be guided by our national interests and the principles of Kazakhstan’s patriotism.

“It is unacceptable that external conflicts, which have existed and will exist, will be used to incite inter-ethnic discord and form fault lines among our citizens. Such provocations, unfortunately, do occur, as we have witnessed. However, we must proceed from the fact that provocateurs, no matter where they live, no matter what passports they may have, no matter what clothes they may wear, must not and will not undermine our unity, the right of our state to pursue an independent policy. Everyone must remember that peace and unity are values, without which we have no future. We do not have and will not have another homeland except Kazakhstan,” the President said. 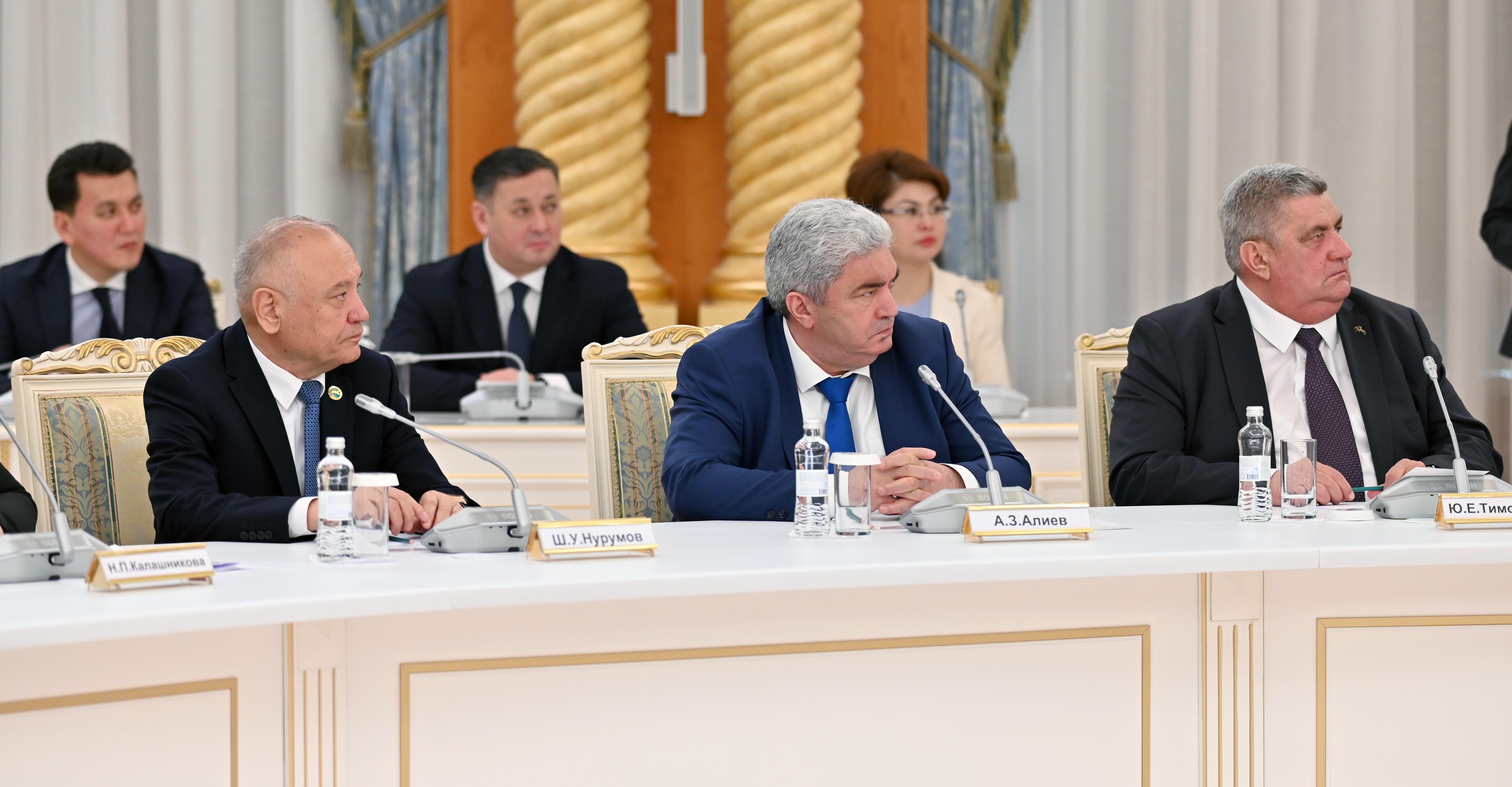 The Head of State urged to disseminate widely unique information reflecting the diversity of our culture and to work closely with an expanding Kazakh-speaking audience. In his opinion, it is very important to tell in the state language about the contribution of other ethnic groups in the development of Kazakhstan. Media outlets working in this direction will be supported.

President Tokayev also announced that the first meeting of the new dialogue platform the Ulttyk Qurultai (National Congress), which is designed to consolidate society by discussing pressing issues of the country's development, will be held next month.

“It will become a universal model of national dialogue. The Qurultai will include deputies, APK members, experts and human rights activists, representatives of all regions, as well as the Civic Alliance, public councils, non-governmental organizations, business associations, and the representatives of industry. The Assembly must work effectively together with the Ulttyk Qurultai. Because, in the end, they have common goals. Young people should be actively involved in large-scale changes. Yesterday, the Assembly of the People of Kazakhstan held its first youth session. Its  recommendations should be carefully studied,” the Head of State said. 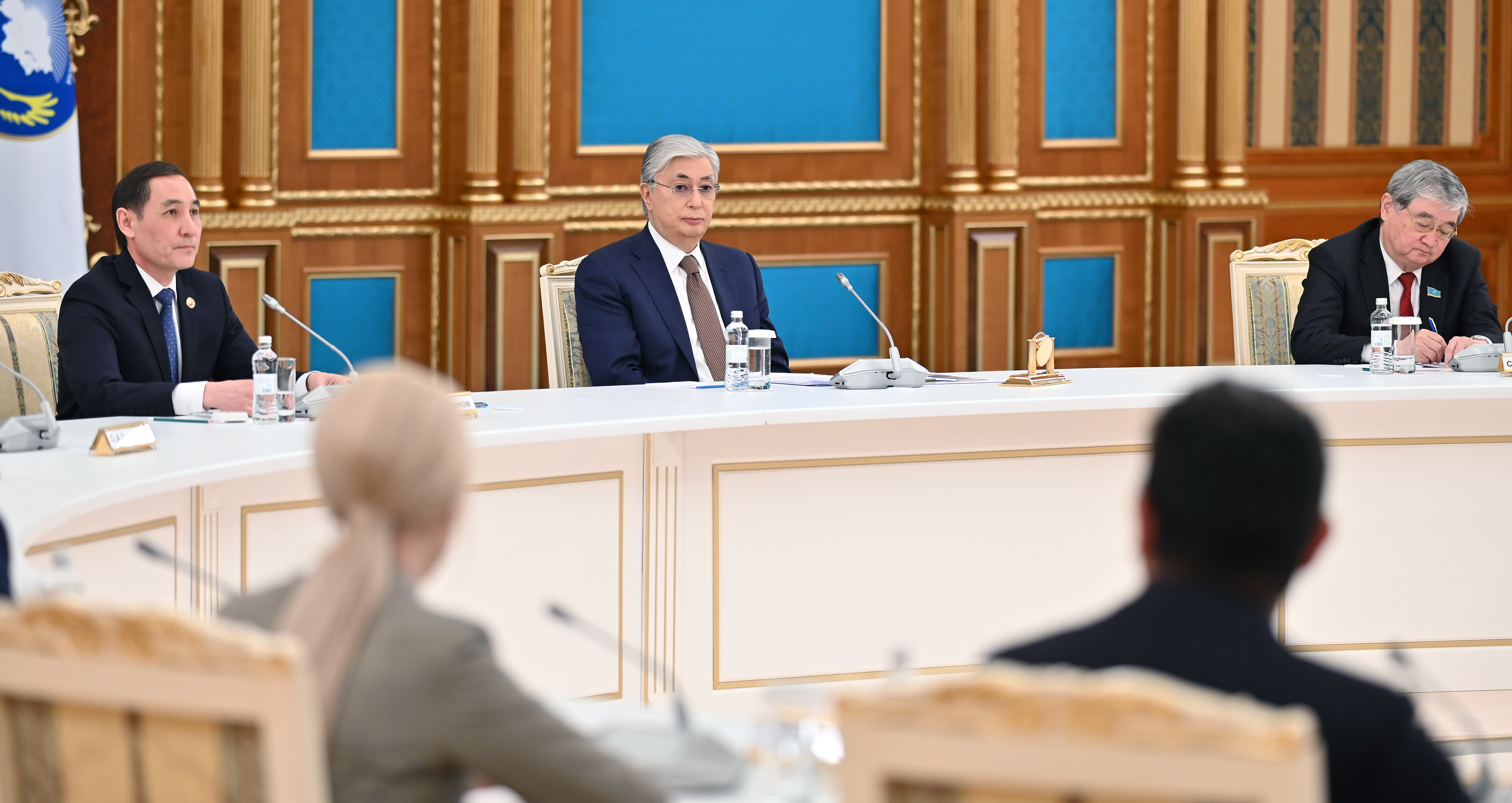 The third priority is the strengthening of human rights activities. In this direction, the Assembly has begun to form a unique institution of professional mediators.

“It is necessary to create a training center for ethno-mediation, to organize permanent training courses, where most of the civil servants of the district level should be trained. I instruct the Ministries of Information and Social Development and Education and Science, together with the Academy of Public Administration, the APK Secretariat, and other authorized bodies to submit systematic proposals on this issue,” President Tokayev said.

The Head of State stressed that Kazakhstan has embarked on the path of decisive reforms in all spheres of life. In this regard, amendments to the Constitution have been initiated, which are of a fundamental nature and fundamentally change the political system of the country.

“We are transitioning to a new state model, a new format of engagement between state and society. This qualitative transition can be described as the Second Republic. A working group has prepared amendments to 33 articles of the Basic Law, which is a third of the entire Constitution. The bill on these amendments has been submitted to the Constitutional Council, which will soon give its verdict,”  the President said.

He believes that the proposed amendments, which have historical significance, mark a new stage in the development of our statehood.

“When we first started implementing these reforms, it was assumed that the draft of amendments and additions to the Constitution would be considered by Parliament. This procedure is enshrined in the current legislation. The forthcoming large-scale and significant transformations will have a significant impact on the future of the country. That is why I propose holding a republican referendum on amendments and additions to the Constitution. Referendum is the most important democratic institution, but it was held in Kazakhstan for the last time in 1995, when the current Constitution was approved. Then the Constitutional law “On republican referendum” was adopted, which, nevertheless, was never applied in practice. This is despite the fact that the Constitution has been amended four times since then. I believe that amending the Constitution through a popular vote will be a clear demonstration of the will of the people. The referendum will allow each citizen to directly participate in deciding the destiny of the country and will strengthen our course towards all-round democratization and building of the New Kazakhstan,” Kassym-Jomart Tokayev said. 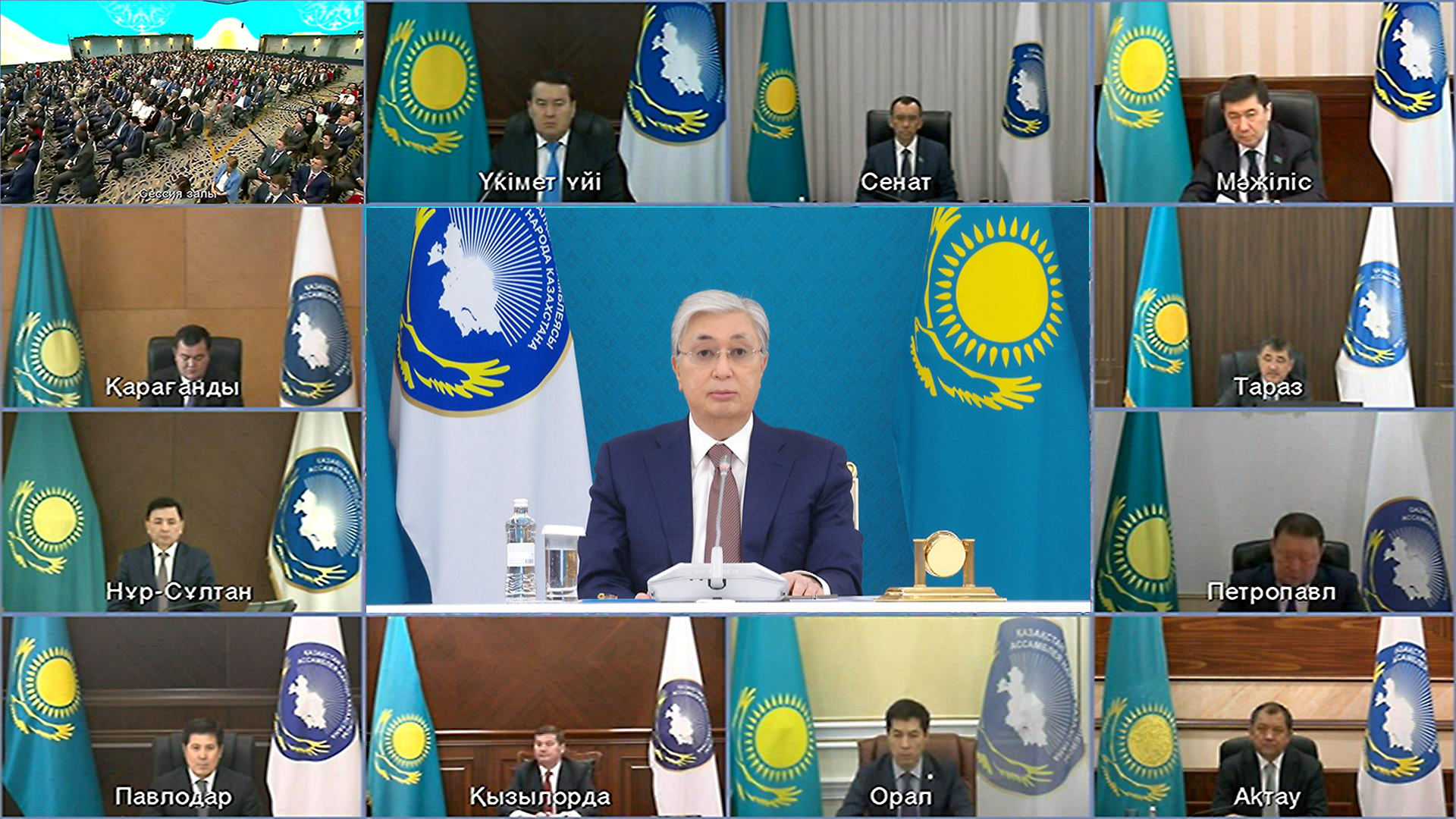 The President once again pointed out that the New Kazakhstan is, in fact, a Just Kazakhstan.

“New Kazakhstan is the way to strengthen our national identity in a dynamically changing world. Without the involvement of all citizens in the common cause neither the state apparatus, nor any political decisions and economic levers can lead us to the goal of renewing the country. To build the New Kazakhstan, we need to completely reformat the system of individual and public values. We will put  a resolute barrier against nepotism and paternalism, corruption and compradorism. The New Kazakhstan must become the land of justice. For this purpose, we must follow not only the letter but also the spirit of the law. Laws are not a dogma; they must be improved in order to solve the urgent problems of citizens. Law, justice and order will be the real factors determining our prosperous life,” the Head of State said.

Kassym-Jomart Tokayev focused separately on the formation of a culture of dialog and the strengthening of mutual understanding and trust in society.

According to him, this is all necessary for the bright future of the country and the well-being of the people.

“We must accept and understand one another, regardless of differences of opinion or belief. We must seek common ground and strengthen and magnify what we have in common. Our principle of “different views, but one nation” is unbreakable. It is unacceptable that high values of patriotism should be replaced by low feelings of ethnic superiority, and that mutual hostility and hate speech should be promoted instead of friendship and unity,” the President said.

He called for a tough suppression of any manifestations of intolerance and division into "us and them”. The Head of State is convinced that the people of Kazakhstan must preserve and strengthen their unity; only through our joint efforts can we build a New Kazakhstan.

“We will undoubtedly implement all our plans. I am certain of this. Together we  will build the Second Republic, together we will bring prosperity to New Kazakhstan! Our state will be just and developed, providing equal opportunities for every citizen! In conclusion, I would like to congratulate you on the upcoming the Day of Unity of the People of Kazakhstan and the holiday of Oraza Ait (Eid-al-Fitr)!” President Tokayev summed up his speech.

During the session, speeches were also made by Natalia Kalashnikova, head of the APK department at the Lev Gumilyov Eurasian National University, Sergey Ogai, president of the Association of Koreans of Kazakhstan, Maxim Rozhin, vice-President of the International Society for the Kazakh language, Nikita Shatalov, political observer, Dihan Kamzabekuly, vice-rector of Lev Gumilyov Eurasian National University, Nadezhda Palinka, correspondent of Azattyq Ruhy news agency, and Askar Pireyev, chairman of the branch of the Akmet Turkish Ethnic and Cultural Center, Alexey Lodochnikov, musician and blogger. 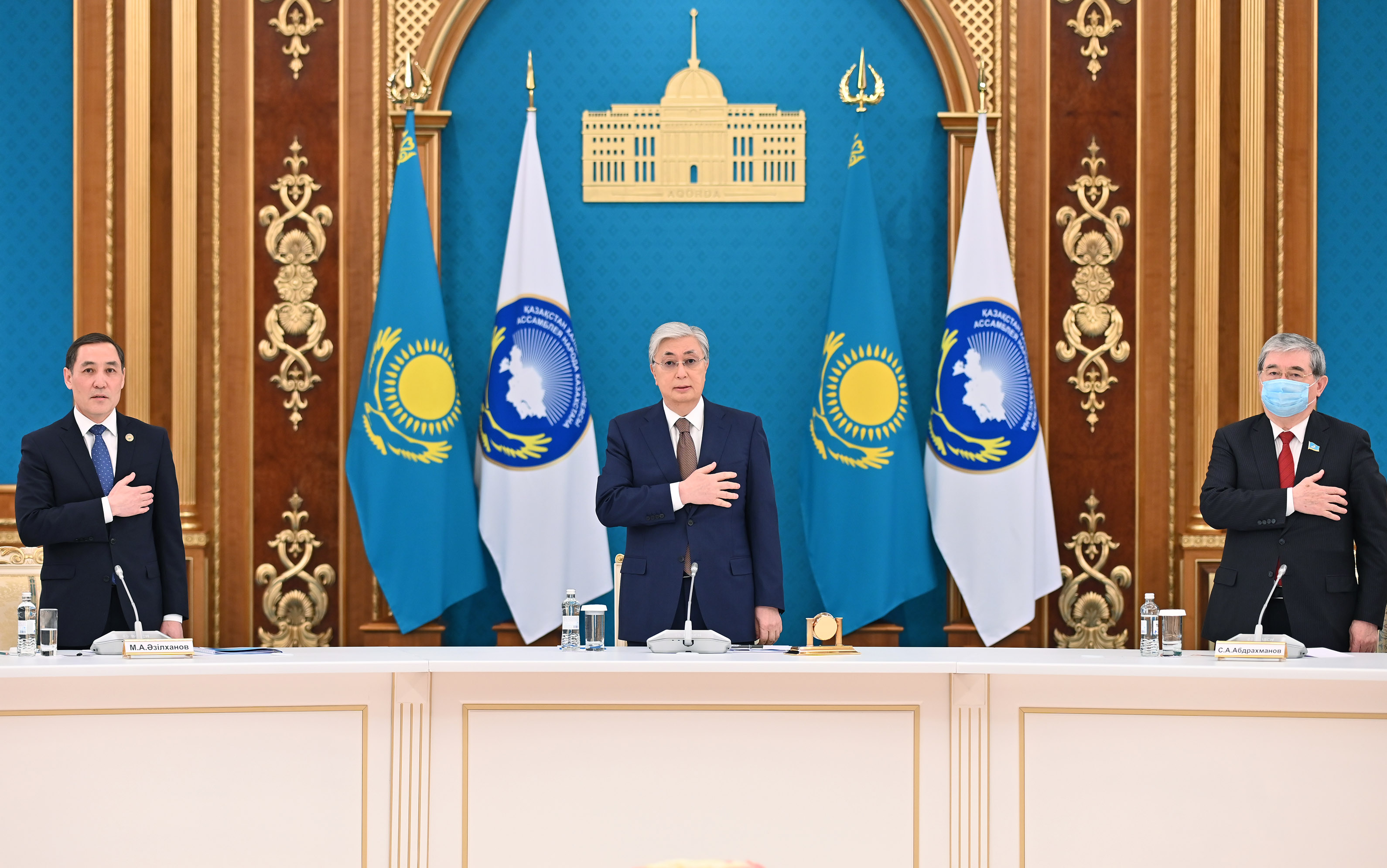 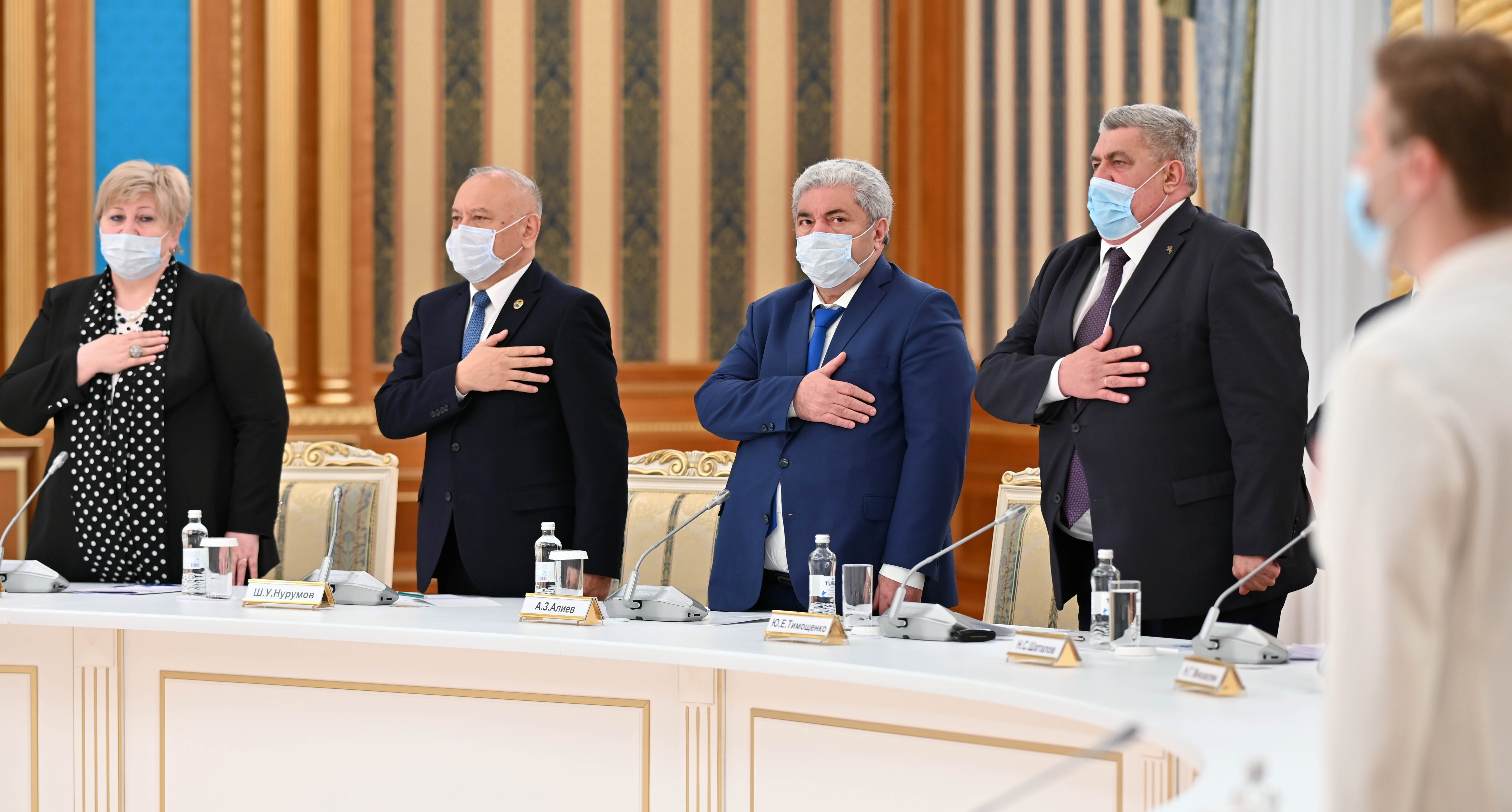 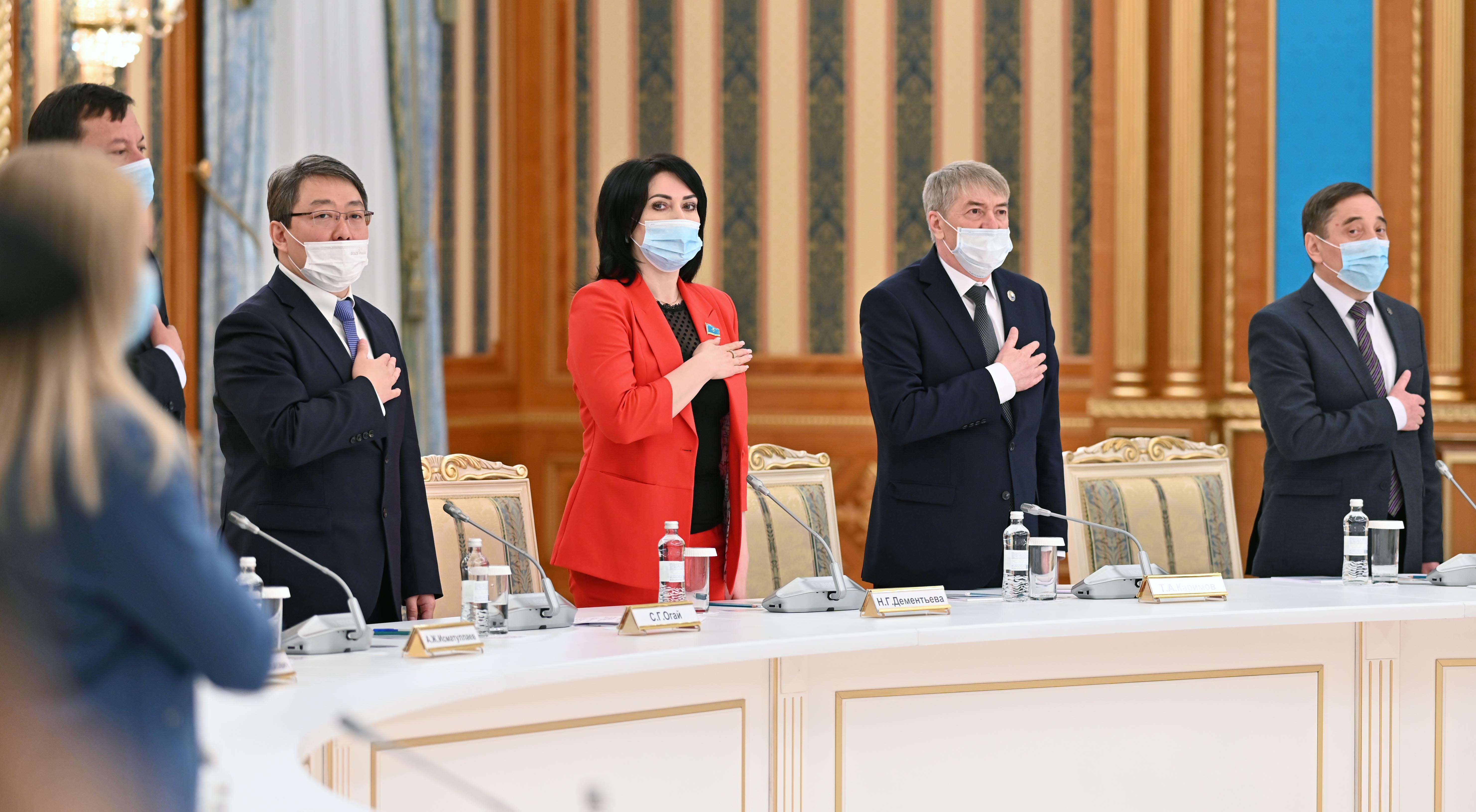 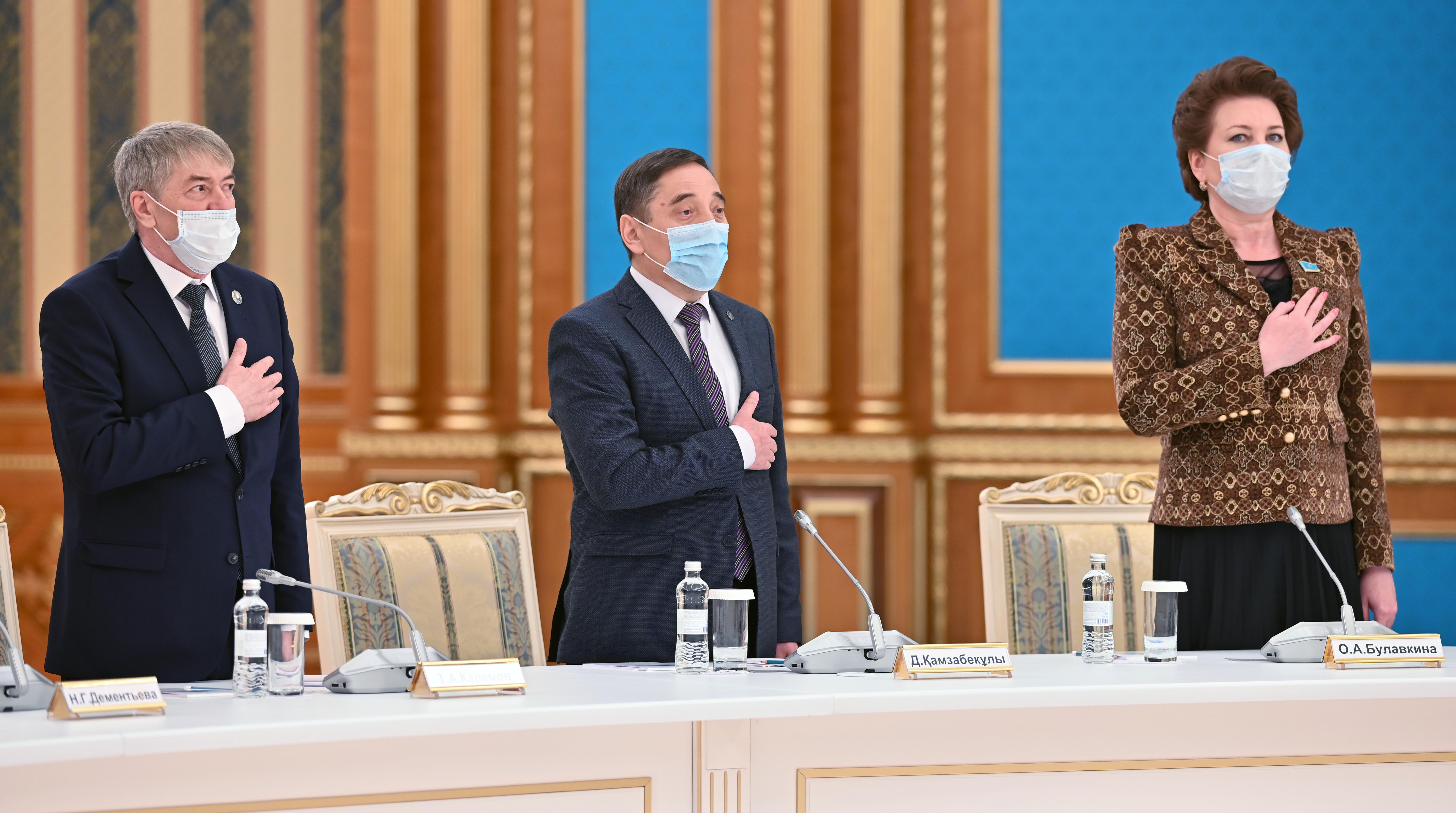 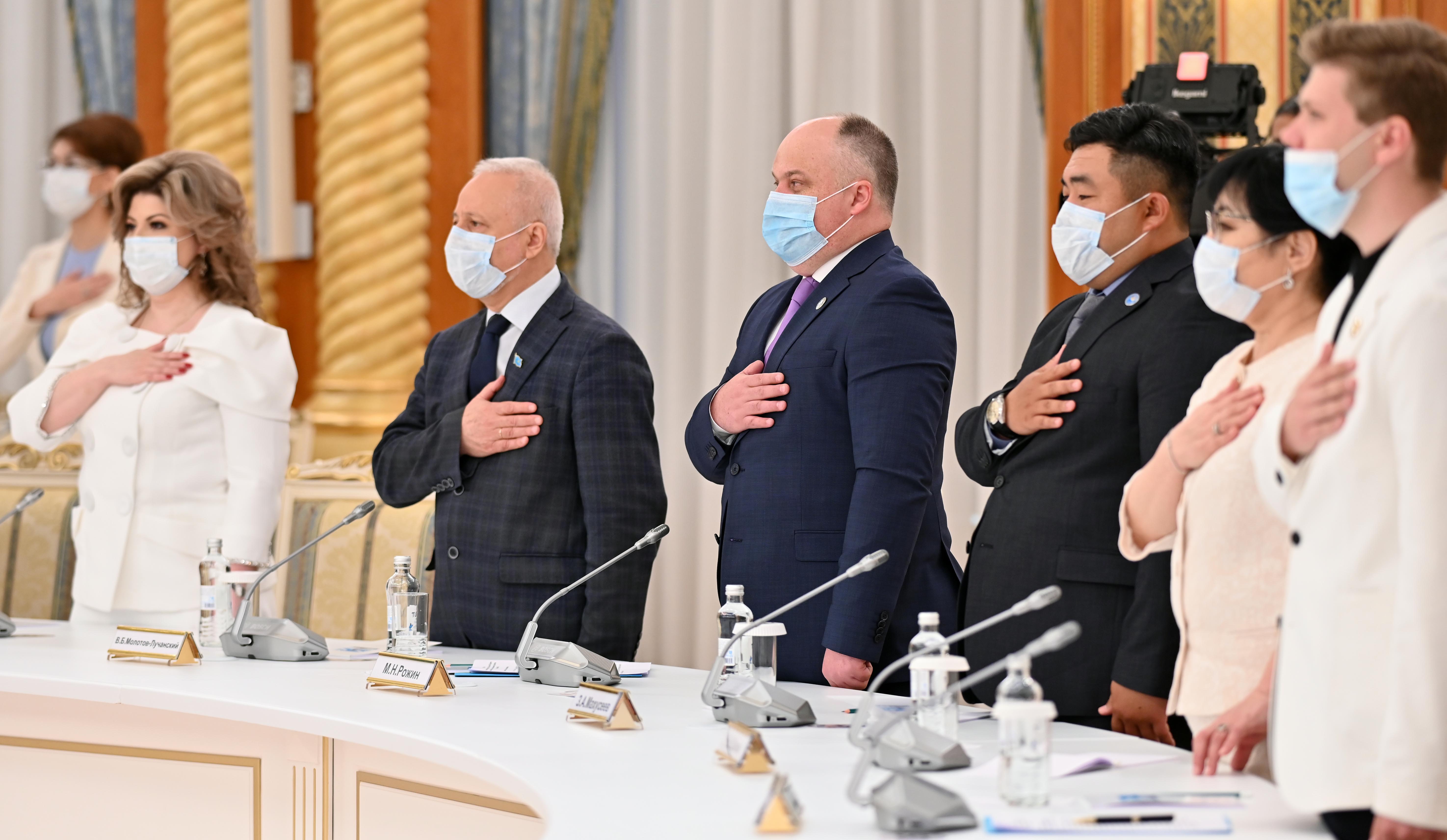 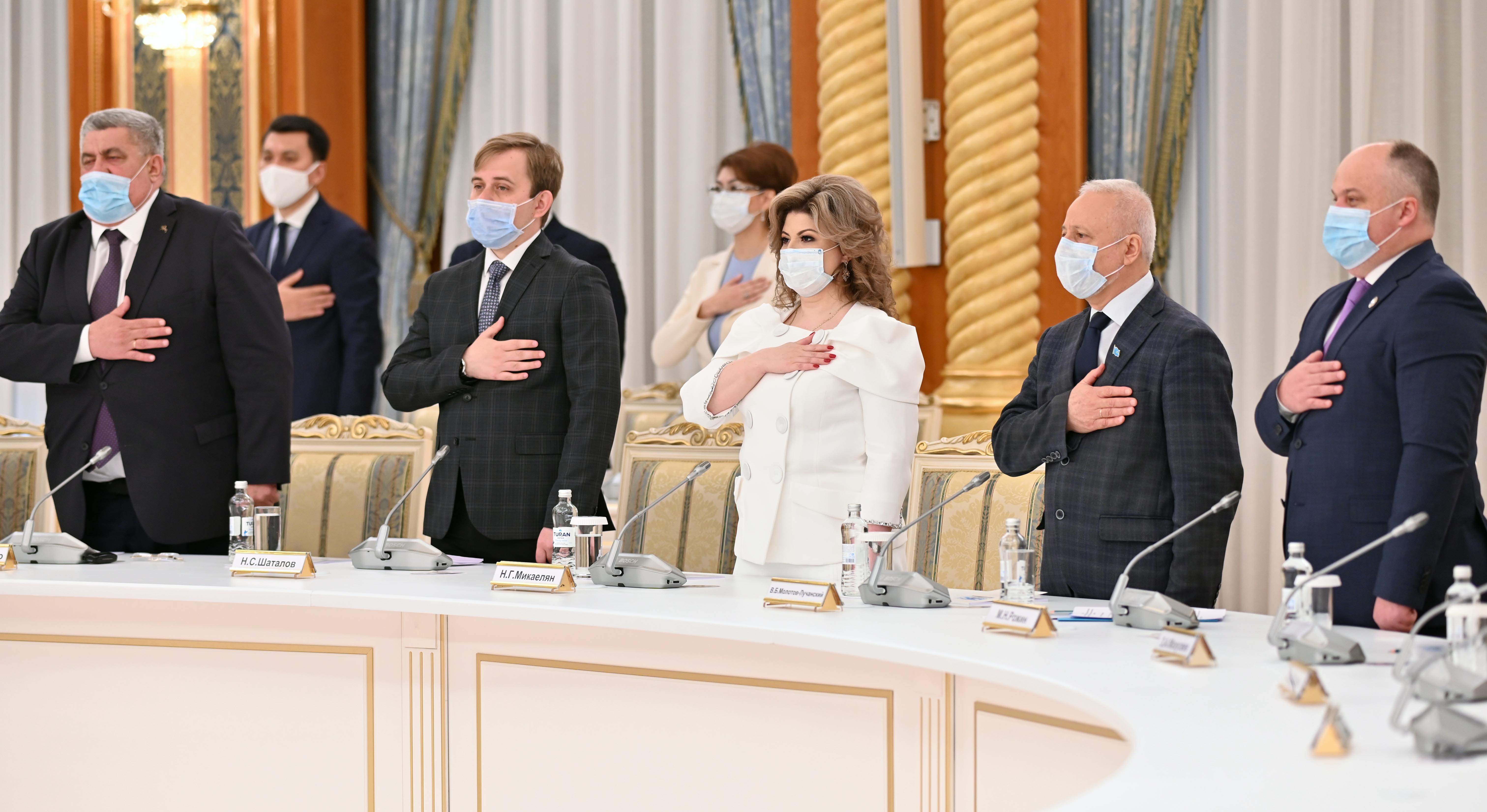 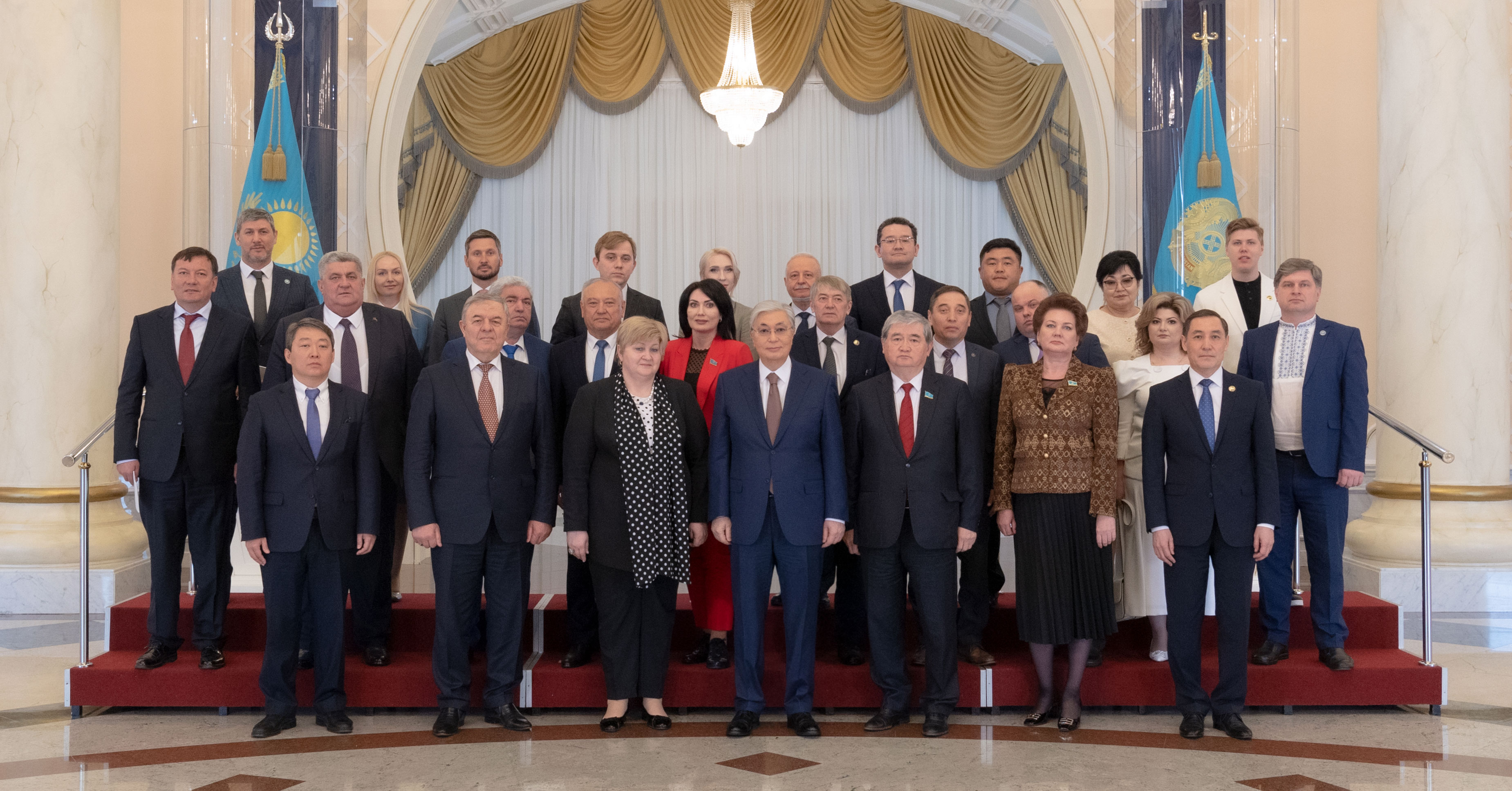